First pattern from midi file loaded as second in Pyramid

Hi, i have a problem with project loading. When files are loading first pattern form midi file loads as a second in device. Anyone know how fix it?

Are you trying to load a Type 1 MIDI File?
I think this happens when theres header stuff in there. It happens to me too with Type 1 files from Sonar

Someone mentioned Bitwig doesnt do this.

AFAIK it’s a “deal with it” issue, but you can contact Squarp at squarp.net/contact

I’m not sure I understand what you mean “loads as second in device”.

So essentially yes… If you load a standard midi file in to the pyramid without 3rd party editing you may get behavior of the Pyramid loading a midi line in to an entirely separate track. You can read what progress I’ve made sorting out these workflows here. 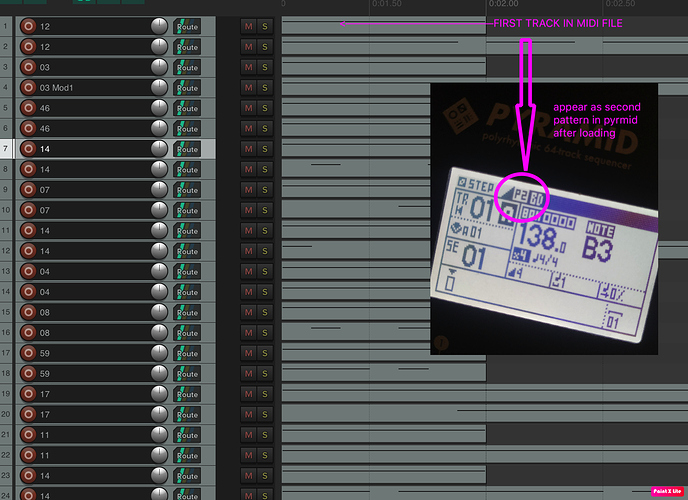 That is exactly what happens to me also.
Someone mentioned it does not happen with Bitwig.

Great, so do I should buy new software to import midi files from ableton project to Pyramid? @Squarp, any idea?

Unless they have updated specs for v11, Ableton does not export Type 1 MIDI files, so you wouldnt have been able to accomplish this anyway.

I feel your pain.

If you would like to bring this up with Squarp, you can msg them at squarp.net/contact

Note: there are workarounds available, but they tend to be grunt work IMO.

It would be neet to start a thread if anyone can share which software exports Type 1 files that are compatible.

I think there is a nomenclature misunderstanding here… I mean… Is it playing the wrong pattern? Is this a file that was originally created on the Pyramid? Is it a midi file you got elsewhere and are trying to load it on the pyramid for the first time? Did you export the midi merged as type 0 then reimport that and export it as a type 1?

Again… I think either language difficulty or misunderstanding of nomenclature… What is it that you are specifically trying to do that you can not?

If you have a copy of Reaper you already have the software you need which can import and export midi files suitable for use with Pyramid.

this works fine for me… a) create a project on the pyramid b) make sure patterns are enabled on track c) on your daw, select tracks d) export as type 1, with name track01.mid e) load project in pyramid, each track has appears as a separate pattern. the only oddity, Ive found is it assumes the track length is 1, so you need to go to each pattern and set the real track length. (this is because track length is saved in the project file, allowing you to shorten a track with destroying midi da…

my personal experience is…
you can import and export midi to/from the pyramid,
but the issue is midi only contains ‘part of the story’ , e.g you dont have fx, sequences etc etc.

for me, this means the import/export is a kind of ‘end of the line’ activity, rather than something you can have as part of your workflow
e.g. the two scenarios I see working are:
a) start/develop your track on the pyramid, then export it to DAW, adapt to ‘finish it’
b) start/develop your track in the DAW, then export it to Pyramid, adapt to ‘perform it’

that said, usually I just ‘print’ stems to audio when I do the pyramid to daw step… (2)
so perhaps others have found a suitabe workflow to go back n’ forth?!
what have others found?

(1) perhaps you could automate the daw side a bit, but not much you can do on the pyramid.

(2) another approach, I think i saw on the octatrack that might be interesting on the pyramid.
forget importing of midi, get the pyramid to send tracks (midi) to the DAW one by one - so multtrack the midi. you could possibly automate some of this using pyramidi, and a suitable daw project template.

That is Reaper… first I exported clips from Live to single midi files, next I made miltiple track midi file (1 type) in Reaper. I checked that in Studio One and ProTools… Same…

it worked to the limits of my testing at the time I tested it … see my post above (*)
this test was pretty quick - as its not a workflow I use regularly - I would certainly not use that as enough evidence to recommend bitwig for this purpose - that said, you could download a trial to test the importing side … unforunately you need a license to test the exporting.

is anyone else using this regularly with bitwig or another daw ?

(*) both the firmware of the pyramid and bitwig has been upgraded in since I tested nearly 2 years - hopefully this only brought improvements, but given it appears to be little used - it may have also brought problems

Yes, I regularly import files from Reaper in to Pyramid and know that it’s possible.

I suppose I should maybe try to do that… Since it seems that’s whats being desired in this scenario.

So, my initial findings are that Reaper, and probably every quality DAW out there can’t edit and then export what the Pyramid is expecting in terms of MIDI files with multiple patterns.

I think what’s needed here is a little more information on how Squarp used the MIDI spec wrt patterns and some research in to if there is a software that is a strict MIDI editor that will export the marker flags that the Pyramid is expecting.

It is my belief, that because DAWs had their own specific requirements while being developed… Nobody ever coded this specific requirement in to the software. Which… is why I’m hoping there is a MIDI analogue to the software called Irfanview… (A popular free software which for many years has been able to open any type of image and doing many editing tasks and is extremely in depth wrt the options to edit using the underlying image spec.) Basically, what I’m saying is that while I think it’s technically possible to edit patterns and then reimport them to the pyramid… The ability to do so won’t be found in most peoples DAWs… If Reaper doesn’t allow the option somehow… It’s pretty unlikely the other popular DAWs are going to be able to do it either.

Pyramid’s use of MIDI Type-1 is rather peculiar and while there’s technically within spec, it’s semantically incompatible with everything else out there. I wrote a tiny Python script to export tracks from Type-1 midi to separate Type-0 files which might be helpful (plenty of other related info in that topic as well). I initially planned to extend that to a more generic utility that could work in the other direction too etc but as importing MIDI is something I almost never do, it keeps falling down the priority ladder…

If Reaper doesn’t allow the option somehow… It’s pretty unlikely the other popular DAWs are going to be able to do it either.

as mentioned above, I tested a few of the major daws…
I didn’t try reaper, as I dont use it - but it sounds like its most others… importing but not exporting

however, Bitwig does appear to be the best, it could import and export midi that would successfully load into the pyramid.

Perhaps, but the midi export was either locked [demo] or unable to do what I was looking to test in the first place. It can import but bitwig will load it as two separate clips of a group. I’m unable to verify if what I edited could be exported successfully…

Eureka! or something… I think the recent activity on this subject has shaken me out of my depression enough to stop procrastinating and actually finish up this academic exercise.

So! That said… Reaper actually can export a type 01 midi file that Pyramid will actually accept as individual patterns…

I said earlier that the second pattern seemed to be a note short of a bar. I just just went in to that midi clip and pulled it’s length equal to the other clip. Then I significantly changed the second clip so that it would be visually distinctive at a glance.

I then selected both and exported again type 1, renamed and then loaded on the Pyramid.

The odd note is that even though there were only two tracks (midi clips) when I exported there were three patterns. An empty pattern and the two original ones… after the empty pattern. So I changed the p1 and saved it on the Pyramid and nothing crashed so I’m gonna call that a success.

Reaper can do the thing.