Why does my Pyramid look different?

Just received this today and noticed the decals are different. Is this a new version or an old version? 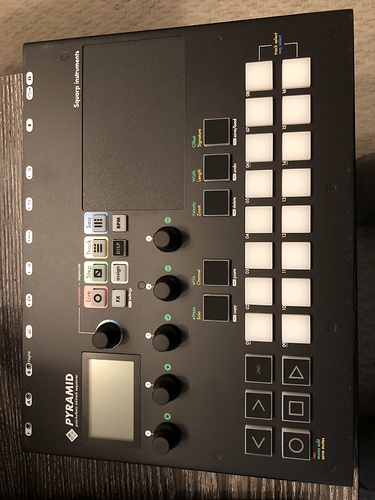 Nice , looks quite a fresh look.

Have they changed the ‘template’ card that comes with it, perhaps to mention pattern shortcuts?

Disappointing that they opted to show less information rather than more though. Would have loved to get some labels regarding some of the many many shift mode shortcuts. Instead they removed the labeling for Rotate and the mode labels above Track and Seq. Admittedly, those last two were rather redundant and pointless, but it would have been nice to get more info in general.

I appreciate the sleek look of the 5 now-black edit buttons. I wonder if they’ve improved the encoders so that their depths now properly fit the shafts and don’t prevent clicks. Or if the screen is improved somehow.

I prefer the previous font on the “Pyramid” label though.

I like the new display design with the screen protector affixed from the top side. Mine appears glued in place from beneath and now floats around from the slightest touch. Found it to be more cosmetic than anything else, as it it didn’t affect its performance. It was a bummer waiting months while they ramped up production only to have the screen protector cave in on day one

So if I’m not mistaken this is the 3rd iteration, funny enough I like aspects of all 3 designs, v1 covered touchpad and plastic film, v2 printing, v3 buttons. I think they all look nice though.

So the black keys are now black, yay

I wonder if they’ve improved the encoders so that their depths now properly fit the shafts and don’t prevent clicks. Or if the screen is improved somehow.

I asked Squarp what the differences in the Mk 3 hardware are and got a very speedy response:

It’s only a cosmetical difference, the printings are new, the screen protection is more solid and some silicone pads are now black. Software and electronics are the same.

Thanks for sharing mate