I thought it would be fun if we stated which hardware/software we use with the Pyramid and which is our favorite!

For me while learning the Pyramid I’ve been using the BlackBox mostly since it’s so fast and easy to use since I can use a single channel for 16 pads. But I’ve also enjoyed using Reason 11 and it’s software instruments.

I’ve yet to start using def files, and sending CC but ill get there soon enough.

What do you use, and which combination is your favorite is there any particular device you think pair extra well with the pyramid?

Software
I have logic Pro, but mostly record to a Zoom L12 mixer. At the moment i’m just into jamming out ideas and creating on the fly than trying to arrange songs in a DAW.

I think the BlackBox is my favourite at the moment but that’s because it’s less than a week old.
It’s replacing a Volca Sample, which is quite a revelation.
I use mine with a midi channel per pad…. I’m not sure how it would work on one channel.

I mostly plan on using it for drums and sampling my other gear. So having the option to play it chromatically is nice, plus on a separate channel you can use euclidean mode per pad.

The Zynthian has a special place as I built it. It’s just a Swiss army knife off stuff - sometimes too much choice. It can be problematic if you try to get it to do everything – I’ve seen folks use it as a synth, recorder, midi host, sequencer and more. I just use the synth engines and it’s been rock solid and a fun project too.

The Neutron is deep, I can get lost in that one and is begging for a sampling session.

Streichfett is lovely, if you like that sort of thing.

Volca Drum is a hidden gem and can really surprise me at times.

In terms of Pyramid connections I have the BlackBox on MIDI B, the Zynthian on USB and the rest on MIDI A

EDIT: OK, i’m reading up on BB single channel mode and it looks like you can have a mixture of both…now busy writing a def file for the note numbers - thanks @Fotopaul

I had the Waldorf for a day, but i could not stand the noise tail, it was killing me. So i sent it back, would have kept it otherwise!

Yes the BB is such a fun and easy box! Yeah you can mix the global midi channel and individual pad channels.

I rarely bother with individual pad channels i do however use am individual track on the pyramid for each pad but still on a single channel.

I haven’t started using def files yet, but I’m reading up on it. Right now i just create projects as templates with all the tracks set up.

well, it we’re talking about hardware with which Pyramid Shines …

also i have to mention Axoloti, it’s critical part of my rig. Pyramid only supports sequencing CC messages, but some gear require SysEx or NRPNs, so Axoloti is the box that does the conversion inbetween.
btw, Pyramid was recommended to me on Axoloti community forums, so i decided to buy it.

other favorite hardware which i don’t control with Pyramid:

Thanx for chiming in!

I’v been really curious about the MC-707, could you expand a little more about the difference between the internal sequencer and the Pyramid ?

While i like to add it to my kit, im not sure what i would gain having both the Digitakt, and the blackbox.

well, 707 and Pyramid are pretty similar in workflow and overall feel.
but Pyramid, which is a sequencer alone, costs ~⅔ of 707 price.

so, 707 sequencer does not have lots of Pyramid’s advanced features — no polyrhythms (but polymeters are there), no MIDI FX, no Euclidean fills/patterns, no arpeggiators (which sucks but i don’t care), note probability only on drum tracks (as for firmware 1.30), etc.

the most significant difference between two is that in 707 you have clip chaining — sort of semi-song mode.

While i like to add it to my kit, im not sure what i would gain having both the Digitakt, and the blackbox.

707 has great sound and great factory patches.
this is the only machine that made me absolutely happy with stock patches, so i can spend more time on making ready tracks instead of sound design, at least for a year ot two.

moreover, it has great FX and can also act for a couple of external machines as a mixer and FX box.

what deserves of special mention is 707 EQs. there is plenty of, so 707’s sound sculpting capabilities are pretty close to a DAW.

Spectralis - for complex Mono-Synth voices and the Filterbank
MPC Live - Drums, FX, Ambient - After 2.8 update I no longer use its sequencer
MS2000 - standard stuff, Dub Chords
Micromonsta - Pads
RE303 - Acid

And some effect pedals…

My Pyramid is the heart of it all, I love that it so quick to sequence things thru it, and particularly like the live recording/looping… (and then perhaps adding some note fx on top)

setup that my Pyramid is feeding

Pyramid -> iConnectivity mioXM , then that goes too…

Audio is all going thru my Eurorack setup then onto the Octatrack.

when i want a little more control for the audio, I introduce a ‘computer’
synths -> eurorack -> es8 -> ‘computer’ -> es8 -> octatrack.
(this allows me to cue different audio sources to octatrack inputs)

the ‘computer’ is currently either a laptop running Linux/Bitwig, or an iPhone running AUM.

(* ) Rample is in my eurorack, but i use midi to have more control, and keep cv free for modulation

which combination is your favorite is there any particular device you think pair extra well with the pyramid?

The Virus TI is hard to beat its 16 part multi-timbral… also means i can select pyramid tracks by playing using the ‘selected midi channel’ (using omni mode).
that said, I was happy to move percussion over a dedicated instrument (initially Spectralis, now Rample)

but, its a very flexible combo, and I’m enjoying exploring the combination… and also their contrasting approaches.

since you are the one who recommended me Pyramid, i always was curious about your rig.

Pyramid basically sits between my PC (running Reaper) and all of my audio gear, so I can use it without the computer, or using the computer as the master clock (I’ve never been able to get Reaper to clock successfully from any external gear, so I’ve just given up.

I sequence most things off the Pyramid, because the workflow is so quick, apart from the drums, which I use the internal sequencer on the Analog Rytm, and a few other things on internal sequencers. I rarely, if ever, sequence anything from the computer, rather just use it to record audio and do edits.

Got a few midi splitters so that everything that may require a clock (such as my Analog Rytm, Nord G2, etc) comes out of MIDI A, and everything that I don’t want to have a clock (like the AS-1 - the internal sequencer is buggy as hell) comes from MIDI B.

Everything out is plugged into the mixer, and I’ve got a small patch bay screwed under the desktop above the mixer to do anything else without having to get onto the floor. 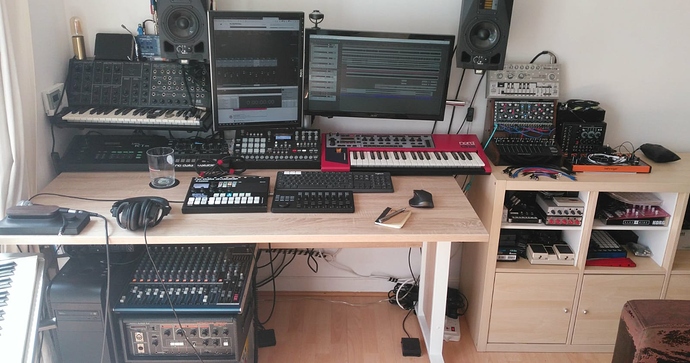 The 707 is an amazing synth but the sequencer is rubbish

There is no full midi implementation (pitch bend, modwheel, aftertouch), no midi track., no piano roll, limited to 1 signature, no midi fx, any track midi event, no pattern, limited to 128 step, limited to 8 track, or note repeat, limited to 8 scene. Pre count metronome ?

Pyramid is still one of the top hardware sequencer. Sure we are still missing few stuff. Like a time line (in number), input midi channel by track, pattern chain by SEQ.

Thank you for expanding on that!

Since I’m using the Pyramid as my brain, i won’t really be getting anything from the 707 i can’t get with my other boxes and outboard effects.

But as a stand alone grove box it looks like a lot of fun!

I will add the Roland Integra-7 to my kit later this month, it will replace any software instruments i need, and together with BlackBox and Digitakt i’ll have huge source for making my own samples from it as well.

The 2.8 made it more suitable as a midi hub no ? Did the 2.8 update made MPC live play better with the pyramid ?

With your setup i bet you can explore new things all the time!

I love my mioXL it’s been rock solid and can handles just about everything i need it to.

Yes, i guess most grove boxes with internal sequencer will have a hard time to compete with the Pyramid.

But if one use these boxes as stand alone for just coming up with ideas they can be nice to work with.

Yeah there is always something to explore

iconnectivity mio certainly has made it easier to connect everything since usb midi is becoming so common - The software is dreadful but gets the job done. Also took me a while to decide how to route things and avoid unwanted midi loopbacks occurring.

I wonder how long before iconnectivity put out a version with TRS midi IO, that is becoming increasingly useful.

The Auracle software has been working well for me, the GUI is good enough and i haven’t really missed anything.

I use different presets depending on what i want to do, when using the pyramid, it’s quite simply pyramid controls every source and all the controls go into the pyramid.

Quite handy to flip preset and in a second routed your MIDI differently.

Personally i do not like TRS just as i do not like break out cables or whips in general. I can see the benefit for mobile gear, but im very glad the Pyramid has standard DIN ports.

Yes, i guess most grove boxes with internal sequencer will have a hard time to compete with the Pyramid.

Interesting topic.
I tend to use the pyramid for the notes n’ clock.

But internal sequencing is most useful on instruments for the modulation, since is usually more hands-on than messing with midi , and also less latency and can be higher resolution.
It’s also (imho) why CV plays an important role still.

But of course midi gives us that centralization and convenience ( all trade offs), and is where the pyramid excels.

Interesting indeed, there are of course different way’s to work and being a beginner i haven’t even begun to explore them.

But in terms of general limitations, such as the number of tracks, track length, MIDI FX, Arpeggiator per track, etc most of them will fall short.

I find the Elektron workflow to be quite fast, to be honest since it’s hands-on, p-lock, etc. But after using the Launchpad X as a controller on the Pyramid to select tracks, mute, and solo tracks I think it’s become a lot faster and easier to work with. A lot of the two-button commands are gone when using the launchpad x.

I haven’t started with CV, as I do not really own any CV gear.

The 2.8 update has changed everything in terms of Midi. I am impressed, I use the MPC now only as a simple sample player and pyramid is sequencing all the tracks/programs.