(speculative thread) ideas for a mk3

as it has already been discussed on this forum, making the pattern mode really independent would be clearer and more logical in the Pyramid hierarchy
so I think that a mk3 version would probably add a 5th button, something like that:

(I also add a dedicated “follow” button which could be much more handy to switch “Player Tracking” ON/OFF for the screen, rather than 2ND+DISP shortcut)

then I thought that I could push a little bit more the thinking, and imagine a design for a mk3 version…
I think that PyraOS is really good and different of other grooveboxes and hybrid systems (computer+hardware controller)
in a good modern piece of hardware (hi-resolution color screen, RGB leds…) it could be awesome 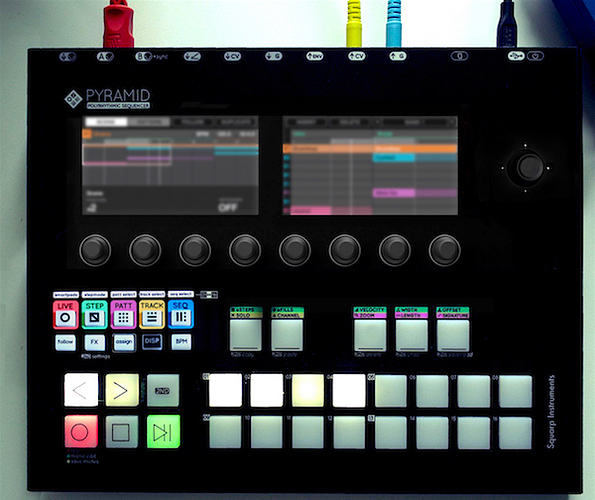 you will probably recognize where the upper part comes from

Just some ideas …
(and of course we are not in a hurry. I’m sure that mkI/mkII versions can still have more great firmware updates)

Tell me what you think guys!

what would you see that can miss you here?
maybe the Squarp Team will like our ideas and we will help them to make a top level hardware revision

really nice !
I really love the idea of a dedicated follow button because I switch very often between the two modes
I also like the colour code for the 5th mode and Pattern related functionalities

High resolution could be useful
I don’t know if we could have this type of screen on the Pyramid though…
but they are beautiful, indeed
actually I would just need at least a two octaves Piano Roll, and I will be fine

A big screen or two screens why not? The most important is that it is OLED for better visibility and lighting.
The idea of ​​the “Pattern” button is also good because I think there will be no other main modes. The SQUARP team will not change the sequencer workflow.
For the touchpad, it could be replaced by a USB-connected mouse or trackball. So a possibility for those who use it.
For me the big changes of the MK1/MK2 would be the power of the machine (the RAM especially) and a USB connection for the exchange of files. The SD card is only used for storage.
I hope that for version 3 of the OS it will develop a file management system less simplistic and they will have enough ram to do it on the current versions of the pyramid !?

I think pyramid has a great value for what it represents: an hardware sequencer born to be just that.

that said, I think it misses some things which DAWs address very well instead.

For sure could be really game changers to:

-provide a ‘special’ master track where the user can freely attach and trigger tracks along the time line.
just like a ‘piano roll’ to trigger tracks ( not MIDI events ) ( seq mode is cool as live performing tool, but from a composer perspective is a bit limiting )

-let the user always have the immediate VISUAL perception of ‘where He is’ in the track AND in the song.

-let the user always have the immediate VISUAL perception of which is the current zoom level he is working at.

-provide a FISICAL horizontal-fader/knob to let the user move fast along the track/whole_song OR choose the zoom level.

-selective editing capabilities: provide the user with the right tools to let him select which event are going to be edited next
( currently you can select continuos ranges of them.
would be cool to select and ‘sum’ / ‘subtract’ element from selection . the top could be a touch screen to drag selection areas )

@stanoc hm… tell me if I’m wrong but all these requests look more like “feature requests” (for an update of the OS, not ideas for a future hardware revision)

Please don’t give Squarp ideas, we get too little updates as it is, an upgraded pyramid would be a disaster for people who don’t have the money to buy one, because they’d be left in the dust

@Stelpa
I understand your concern, and I totally agree with that
but I don’t think that a new hardware version would mean the end of the support of the previous ones
nor even the end of the feature updates
(in any case not with the design suggested above…) there is nothing that changes in the architecture of the Pyramid, fundamentally
(apart from the color on the screen :D)

I am much more worried about the difference of OS with the Hermod ! …
as I said, I don’t understand why they opted for a different OS
it will do a lot more work to keep both systems up to date

(hope they are not so different that it seems …)

@Jeff
I was thinking about your ideas and I must say that a dual screen would be clever
indeed, the Pyramid works like that (DISP screens)

and you also convinced me on the 8 encoders in line! (I was saying in another thread that it would be great if we have 2x4 encoders “ala Elektron”
but this disposal is more handy I guess… with the name of the parameters just above, on the screens
(no need additional parts like small OLED screens, LED ring encoders etc.)

nor even the end of the feature updates

actually, it very likely would… especially if the hardware was significantly different ( which means the software starts to diverge) - squarp are perfectly within their rights to say that the Pyramid 1 is ‘feature complete’ and useable as intended, and commit to only resolving bugs. manufactures do this all the time.

anyway, id say this concept is not enough of an evolution for squarp, to offset the development costs required… its still essentially a sequencer, and its cost would rise a bit closer to other daws in a box (akai), so that’s extra competition

of course, mk3 would be able to do things that mk1 / mk2 can’t do
but evolution is positive, isn’t it?
(especially if it stays in the respect of old models)

anyway, id say this concept is not enough of an evolution for squarp, to offset the development costs required… its still essentially a sequencer, and its cost would rise a bit closer to other daws in a box (akai), so that’s extra competition

I see your point but currently there is no standalone midi sequencer in a modern designed box
in addition, I think that PyraOS is way better on some aspects than what we can see on hybrid systems (MPC, Maschine…) so there is a place to take on the market
and I think that Squarp Instruments will need to grow (this is what I wish for them anyway)
and let’s say I’d rather have a “Pyramid mk3” than a “Pyramid II” if you see what I mean …

(and I’m still looking forward for PyraOS 3.0 of course)

That’s very optimistic of you, but sadly that just isn’t how things work in the electronic music industry, in almost every case. Support ends when something new comes along, even if it’s just bugfixes. And then there’s the fact that Squarp seems unwilling to communicate or update their best-selling product anymore for whatever reason - I just can’t believe that they would be much better if they suddenly had another revision on their hands.

That’s very optimistic of you, but sadly that just isn’t how things work in the electronic music industry, in almost every case. Support ends when something new comes along, even if it’s just bugfixes. And then there’s the fact that Squarp seems unwilling to communicate or update their best-selling product anymore for whatever reason - I just can’t believe that they would be much better if they suddenly had another revision on their hands.

yeah you are probably right
and you can call me an optimistic
I always said that I would love to see the Pyramid catch up with its only real competitor, the Cirklon (and beyond)
Go Squarp!

+1 for that. 8 knobs and a bigger screen or dual screen pleeeease! Touch pad is unnecessary and a likely point of failure some years later.

same thing for the Push / Push2

i agreed, this is partially true…
(though most of Live 10s improvement to Push, are for the P2s display… so obviously those features are not making on to the P1)

but in both these cases most of the software resides on the computer (so lots more resources to play with) and also means (at least in case of Push/Live) this development is being funded by software upgrade costs (e.g. Live 10 upgrade), rather than the units cost (which they already have pocketed

and lets not forget we are talking about much bigger development teams, so more resources for different products.

easy to forget we also have very few voices here (20-40 active?) compared to the number of units sold (mines close to #800), perhaps the voices here are representative at times, but perhaps at times they are not.
(there is a natural bias on product forums - towards users looking for solutions, its the nature of the beast)

yes, you are right. these are feature requests, indeed.
it was something that just came to mind after reading the original post.
Actually it would be great to have such features in the current pyramid version. And, for sure, I hope it, as we know they are preparing for pyraOs 3.0 release in the near future…

For me is a NO.
Really don’t aspect that or something like that to happen in less than 3 years from the 2018. I wouldn’t !
I bet before 2022 we will see NOTHING coming out as a MkIII .
And, because is rather better concentrate energies on something more durable, I would keep the wishes on 2 topics: 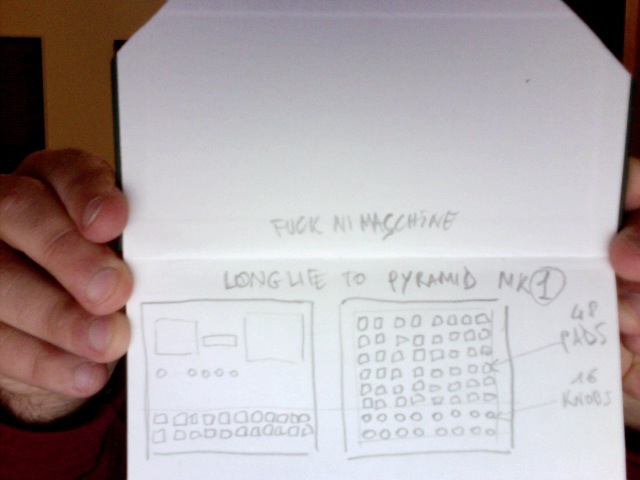 Fab, what you want already exists I guess
since Squarp gives us the midi implementation of the Pyramid
http://squarp.net/PYRAMiDi.pdf
you can already select Tracks and Sequences (and probably Patterns with the next update)
via any midi controller you want
(for exemple a 64-pads launchpad)

(since we are not welcome to suggest new software features anymore )

it is already the case I’m afraid… : (
when we see that we only have 7000 events to use with the current hardware
the least new feature that would take up some memory (and thus reduce this limit even more) seems unlikely …

besides, v2.0 could have been the last, but now we know that we will have a v3.0 !
so that’s good news anyway

Sorry man, but sincerelly:
would you buy a Pyramid dedicated launchpad or a Novation one?

I know already the answer .

And even more my disgusting drawn design suits much better within 16 knobs and 48 pads , instead of 64 pads.

Also,
It is not so automoatic and easy as you painted.
NOvation Pad doesn’t answer perfectly to pyramid without programming the hell out of it.

I stick on my proposal.
@squarpadmin should listen. This is awesome. It’s rich. Its stylish. its better over all. its our. its money for them.

would you buy a Pyramid dedicated launchpad or a Novation one?

to be honest, neither of them
in term of sequencing, I like having only one unit to focus on
(and I 'm quite good with pad combos now :D)

but I’m all for diversity!
and the release of JAM did not prevent NI from releasing the mk3

so… no problem here
I wish that Squarp will be able to build many InstrumentS !

For me, I’d be most excited by a Pyramid MKIII that had NO screen at all. Little screens are the bane of my musical existence. Knobs, sliders and buttons (sometimes wires) are where it’s at for me.

Although it’s nowhere near the complexity of Pyramid, the Novation Circuit is an amazing bit of mechanical engineering. Not a OLED to be found, but a very intuitive workflow and a very comprehensive synth/sequencer device.

I’m not smart enough to design a screen-free Pyramid, but I’m sure someone is. Maybe even better, a 14 segment LED display (90’s blue please) Pyramid MKIII. Woo!