Sections vs Rows and Song mode

I’m reading the manual about sections and trying to understand when I would use a section, instead of rows and the “row selector” button. In the example in the manual, it seems like sections are analogous to rows, but because they can contain patterns across multiple rows, they offer more flexibility to create arbitrary pattern groupings, and would eliminate the duplication needed to use rows alone to create groupings that happened to share patterns.

For song mode, it would be very helpful if a song could be an arrangement of sections or rows. If we can think of rows as sections that happen to have a predefined set of patterns and a convenient “select” button, this could work. I can definitely see myself wanting to create a song out of rows.

sections are more arbitrary than rows…

so the row buttons work very similar to scenes in ableton - you activate all patterns in that row.

where as a section is any group of patterns…

nice thing is you can mix and match between these…
its pretty quick to launch a section, as its just select section and hit main encoder.

you seem to be able to have an arbitrary number of sections… at least I haven’t hit a limit yet… though can’t say I tried, so probably is one

… but certainly more sections that there are row buttons.

From my experience with Hermod, it can be a challenge to rotate an encoder button very quickly and precisely, as well as press an encoder button without accidentally rotating it. I’ll add this to my list of feature requests, thanks.

Screen is larger on hapax , so I find it easy to see and use on hapax

Personally , I’d recommend trying what’s there and gaining some experience - before deciding what needs changing

I had no problem seeing the screen on Hermod, it was about muscle memory. I’ve used enough sequencers with rotary push encoders to know that they can be challenging to use in a live situation where you’re juggling a lot of things. However, I will wait to actually try Hapax before commenting further. Maybe I’ll be pleasantly surprised!

I am patiently refreshing the DHL page once every few seconds for the next week before I pass judgement. I will say, I quite liked how sections worked on the Pyramid, but rows may remove the need for that type of flow.

Things could work out fine as they are but, without having put hands on one yet, I do think that some mode where the sections listed on the screen and use the row launch buttons to trigger sections would be nice even just from a “once I’ve figured out sections, maybe I don’t need the encoder” perspective

how about just making a stable OS that allows you to save, that doesn’t freeze or crash and doesn’t periodically corrupt your files when it actually DOES allow you to save?

i have managed (yes managed, because it seems a challenge for my unit) to save sections A through U of populated patterns and jammed that way instead of rows. unfortunately my unit crashes or freezes at random time intervals, it’s great. I just love populating sequencers with midi for hours a day just for giggles and cringe when it doesn’t save, or better yet pretend to have saved but made a poo/corrupt file.

is there a way to SOLO (besides muting everything else?) also you cannot deselect any pattern for silence, is mute the solution for this too?

how about launching more than 1 pattern per lane? this is a biggie for me. so it can only play 16 patterns at any given moment? are we now in pioneer squid territory!?

being able to copy lfo’s and effects from one pattern to a different pattern, not just the notes?

the sections/song mode REALLY need their own trigger screen perhaps like chord mode using the abundance of buttons available. I totally agree moving a NEW encoder in a live situation through your sections/song is doable but it’s a lame solution. but now moving a 2 year old worked out encoder is NOT doable nor a possibility… let’s reiterate, there are a LOT of multi coloured buttons available, clip/song section launch view?

so no one has thought about this before? with as many problems as I (and lots of others users on this forum it seems (this is my FIRST posting here) have experienced in just 5 days of hapax usage? really?

seems like no one thought of a lot of things before releasing this unit into the wild.

my unit#0231 is so unstable that at this point in time I will NOT be moving anything from my pyramid, MMT8’s, squid, mc500, mega ste or pc over to this. I’ve actually removed this bad juju from my studio and am contemplating returning if for exchange because I cannot in good faith sell this to anyone knowing they will experience the same frustration with no warranties.

I’ve also sent several frustrated emails with even more problems and videos to squarp over the last 3 days with ZERO replies so return or exchange is probably not possible. i had such high hopes for this unit…

the sections/song mode REALLY need their own trigger screen perhaps like chord mode using the abundance of buttons available. I totally agree moving a NEW encoder in a live situation through your sections/song is doable but it’s a lame solution

agree w this!! being able to arrange and trigger sections from the grid would be great.

weird, they got back to me super quick.

weird, they got back to me super quick.

no threats or insults here, but a proposal for expanding Sections vis a vis Songs in Pattern mode . . .

after working a bit with Sections and building up a Song, the pros/cons from the standpoint of trying to build up a basic dance track:

pros – like other modes and functions on Hapax, Sections make compiling various Patterns across multiple Tracks into a Song much faster and easier to keep track of than the Sequence mode on Pyramid. if this is the limit of Song construction in Hapax, it’s already a great addition

cons – unless i’m mistaken, a given Section is ultimately still a collection of mute states for Patterns across all 16 tracks, i.e., either a Track is mute or it’s triggering a single Pattern for that Section. which seems to make the use of Patterns less efficient than it could be in constructing a song.

confining a given Section to one Pattern per Track translates into either (1) more Sections or (2) more intricate Patterns if you need to accommodate discrete changes across parts of a track, e.g., if you want to go from just a Kick drum → Kick + OHH → Kick + OHH + CHH → Kick + OHH + CHH + Clap as an intro that’s four 4 or 8 beat Patterns or a single 256 beat Pattern (that you can’t easily use later). it’s not the end of the world if this is the only way to compile Sections but i think it could also be helpful if the Hapax grid was used for more than freezing mute states for Patterns by Track.

in the current iteration, if you want to create a Section from Pattern mode, you seem to be limited to this universe of binary Patterns (either active and selected or muted) across the 16 Tracks. for lack of a better term I would call this the “Scene” view of Pattern mode: 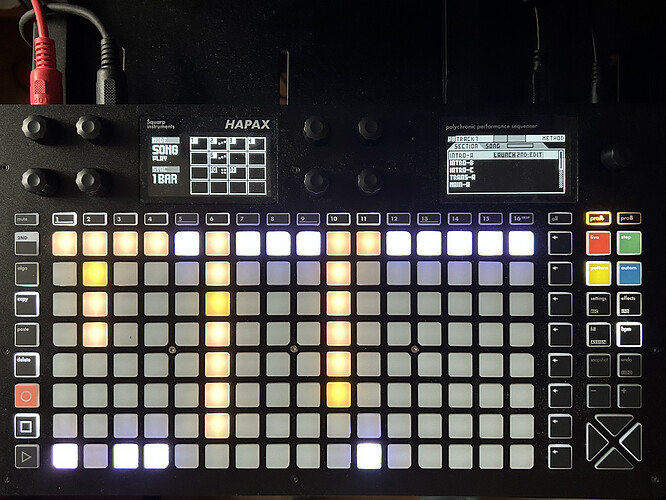 someone else suggested in another thread giving each Pattern and/or Track its own unique color, which i think could possibly open up Sections to more than arranging mute states for a given Pattern/Track. so that the Pattern view would then look more like this (hard to tell from the photo but basically each pattern number would be assigned a unique color in the same way each note is assigned a unique color in Live/Step modes): 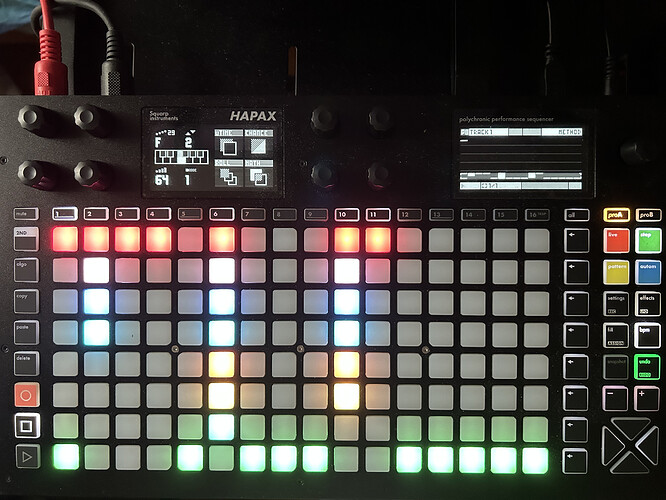 then, if you had an “Arranger” view in Pattern mode that essentially rotates the 16 tracks 90 degrees, you could program multiple Patterns across each Track for a given Section in the same way you enter notes in Step mode. so for a typical Intro section from the Patterns above, a 16-bar Section might look like this: P1 from Track 6 runs for the full length of the Section while P5 from Track 10 doesn’t come in until bar 8 and the runs alongside P1/T6 for the remainder of the Section. 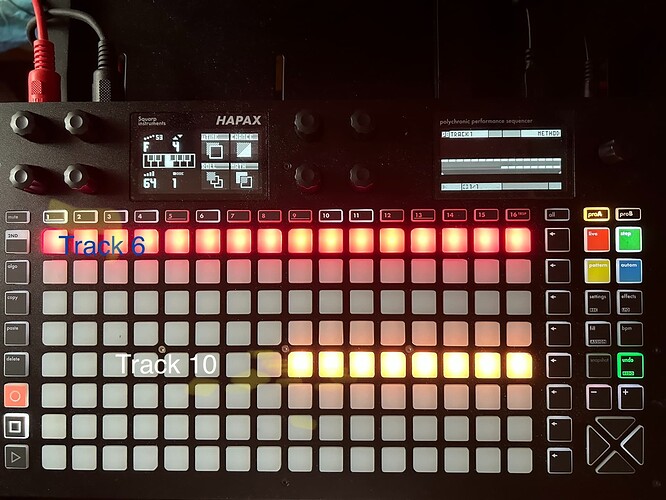 and in the same way we can scroll right in Step mode when a Pattern is longer than a single bar, we could scroll right as far as necessary depending how long a given Section is set to be. also scrolling up and down between the 16 Tracks per Project, but since Pattern color would be uniform across track, no need to assign different Tracks different colors as well.

basically, Step mode for Patterns, which I think would allow for dynamic Sections when constructing a Song

if you had an “Arranger” view in Pattern mode that essentially rotates the 16 tracks 90 degrees, you could program multiple Patterns across each Track for a given Section in the same way you enter notes in Step mode.

When I started using my Hapax, this is exactly what I had hoped to find.

My experience with sequencers was limited to a few stabs at using my Blackbox’s functionality, which happens to include a very primitive version of this. You start a sequence at the desired point in a song section by clicking on it, and Blackbox will repeat that every time the section is played. Blackbox has no way of editing this; any changes necessitate re-recoding the section, which is quite the waste of time, IMHO.

I assumed there would be a much better way to introduce a pattern at a given point point in a section in Hapax, but of course there isn’t. With Chris’ idea, we gain that. I love it!

I too would really, really like some kind of arranger view for songs. I’m coming from the Deluge (well not really from it, since I’ve kept my Deluge), and while the Hapax brings amazing and wonderful features to sequencing, the Song mode, for me, is not great. It’s so abstracted away from a ‘song’ that it feels more robotic than fluid or creative.

It may not help that I’m using patterns of differing lengths, but the fact remains that with a visual ‘timeline’ of sorts, locating and placing sounds is far more intuitive.

the current workaround i have for those transition/bridge Sections is to create a one-bar Pattern (Trans-1, for example) and then cut the immediate preceding Section in the Song (Verse-1) down by a bar and insert Trans-1 between it and the next Section. not ideal and eats valuable eight-pattern real estate on a a Drum Track but seems to get the job done at the end of the day.

Squarp is aware of the feature request and not immediately ruling it out, but also envision it further down the road if it ever does get implemented. which is fair, given the list of other feature requests that are likely higher priority in this early Hapax life cycle. to me it’s not a dealbreaker, relative to way everything else meshes so well together in the workflow, but would certainly be a nice addition to the UI.

I may also use the form to request a “timeline” oriented song mode just to add a vote. I understand it may be down the road, which makes sense given that Squarp undoubtedly has a lot of low hanging fruit to pick first (like MPE).

In the meantime, thanks for the tip. I will continue to explore and see how things work. There is so much to love about this machine.