I wanted to see if I could get some advice from y’all. I am potentially looking to invest in a Moog Minitaur. I currently own a Moog Little Phatty, but I am looking to scale down on space and keeping the Little Phatty for recording and jams (The Minitaur will be used for live performances, hopefully when live shows become a thing again). My goal is to also purchase a MIDI Keyboard to control my SE02, SH01A, JX03 and the Minitaur. I have a MIDI Merge 4x and MIDI Thru 4x boxes to pass my MIDI signals to and from the Pyramid. I wanted to get some advice on the best way to connect it all up. Below is my current configuration and a potential future configuration. The 909 and the TR-08 are controlled on my Pyramid using the pads to program tracks. Thanks Y’all! 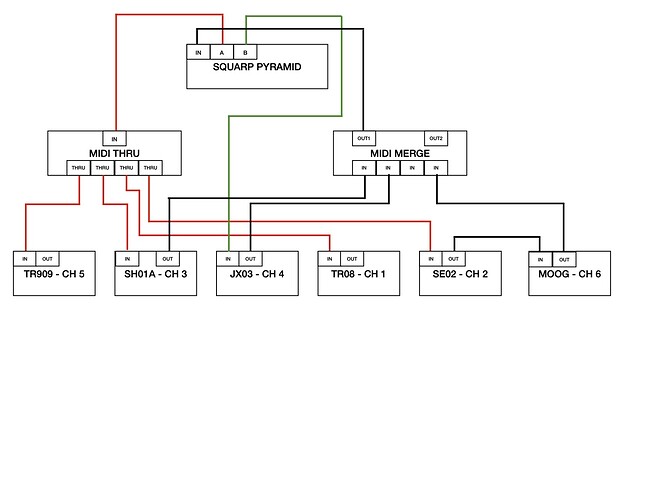 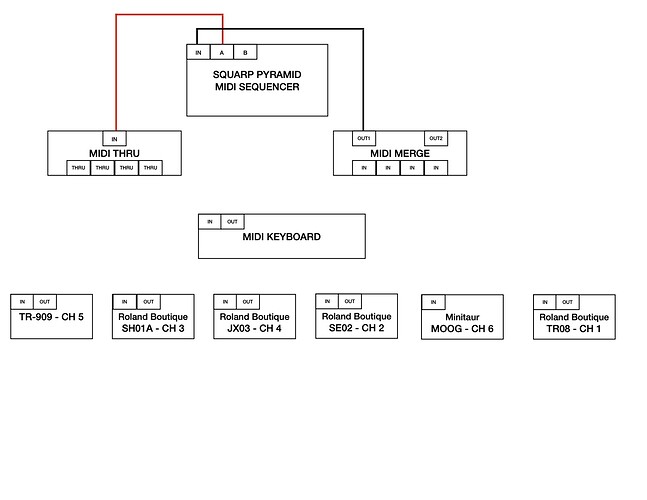 Not sure what your needs are for controller capabilities, but it looks like a fairly straightforward solution would be to use your midi keyboard in conjunction with omnimode on the pyramid. This would take the merge box out of the equation as the one midi keyboard would control all of your channels. You’d need to use one midi thru port on a synth it looks like (or pick up another midi thru box if you’re averse to daisy chaining).

I use this method in my studio, with a quadra thru box on both midi out ports. The minitaur is in my rig too and it is so fat. I love it.

If you are set on using multitrack mode, you can add whatever you need into the merge box and then just switch channels on your midi keyboard as needed…which is usually done quite simply.

I am not the greatest at interpreting. Would you mind explaining the MIDI connection path? I would like to have the option of multitrack mode, but I am flexible.

do you really need all those midi outs? I just have one synth with a midi out into the pyramid for controlling.

I have found that daisy chaining my synths to the Pyramid has caused a number of problems. One being latency. The other problems are internal to the Roland boutique series with MIDI-THRU bypassing. I would try to record a track on the SE-02 and it would then generate the same notes on the SH01A, even though the MIDI channel for the SE02 was selected.

This looks great! I will look into this. Since the Minitaur only has a MIDI IN, how could I apply a MIDI keyboard to it and then have it send whatever I play into the Pyramid?

Note: Minitaur has MIDI Out via USB MIDI because: sends CC with knob tweaking so you can record this.

Also note: MIDI Thru is not the same as MIDI Out

If I’m correct, Roland released a firmware update that modified the MIDI OUT to act as a MIDI THRU for the Boutique series.

Also, would the MIDI OUT via USB also serve to power the Pyramid?

, would the MIDI OUT via USB also serve to power the Pyramid?

No
Different kind of connection

How would I power the Pyramid? Sorry, I am a little lost on routing the MIDI.

I didnt suggest hooking the Minitaur directly to the Pyramid - merely pointing out that the Minitaur does have MIDI Out which comes in handy if you want to “record” knob tweaking, since you do not have the Minitaut in hand yet.

If you are interested in utilising these features you will want to factor the above info into your configuration rather than discovering this later.

Edit to add: to answer your most recent question i dont know enough about what youre trying to achieve, but it seems other responders understand well enough to make suggestions. Just wanted to pass along Minitaur info since i use one in my rig.

Thank you for the information.

i daisy chain but first I never try to make the chain too deep. The second is, it really depends on the synths. Some midi thrus are really fast, especially if they’re hard thrus, but some synths are definitely slow. Gotta listen and see how it goes. Anything timing sensitive tho i wire direct.

I want to streamline my process so that I can route all my synths to a single MIDI Keyboard.

FWIW I have have my MIDI Controller (MPK 261) going from MIDI OUT from MPK to MIDI IN on the Pyramid. I then have all synths going into A + B on the pyramid (they’re all routed via MIDI with MIO XL). I control all my synths via the MPK.

I assign each track in my Pyramid project to the corresponding Bank (A or B) and Channel (1-16). Then whatever track I’m on on Pyramid controls that Synth from my MPK which is what I think you’re trying to accomplish.

I then have all synths going into A + B on the pyramid (they’re all routed via MIDI with MIO XL).

With this configuration, since it’s going to the A & B outputs, would the synths be wired this way:

I like this config and personally accept this as a common scenario, however misguided I choose to be.

Here’s the complex part: I think you can use the MioXL with the Pyramid MIDI USB for both power and data, no? (I avoid iConnectivity devices, but just in case I ever did…!)

That would be a major selling point for me: Using all 3 outputs from the Pyramid!

Basically that’s it, below’s the path for a synth using DIN or USB for MIDI. I have eight synths going to Pyramid A via MIO XL and TR-8S is solo on B, TR-8S IN -> Pyramid B (OUT)

MIDI Routing in Auracle
Once synths are in Mio XL, either through MIDI or USB I route with “Auracle” which is iConnectivity’s configuration program to route MIDI.