I can’t wait to try some good euclid patterns with this little beast!

Yes!
It looks like a great box, just what I’ve been looking for. I will wait and see, but… yes!

Since I bought my Pyramid, I’ve been looking for sequencerless drum synths. I got a MAM ADX1 recently which is fairly nice for all those old non-TR sounds (and let’s admit it, those TR sounds are everywhere to the point of saturation). Audiothingies are on my list of companies to watch, with the MicroMonta on my “It will be mine!” list. Gotta feeling the DoubleDrummer just joined it.
The Alesis SamplePad/Rack is a similar percussion sample playback machine but I don’t think it has as many options and definitely no synth engine.

Yep, loving the look of this. My Micromonsta is my only poly and it just does the business. I’ve been so long looking for a drum module that isn’t a retro clone, reissue or copy of some Roland thing from a bygone era.

Yep, loving the look of this. My Micromonsta is my only poly and it just does the business. I’ve been so long looking for a drum module that isn’t a retro clone, reissue or copy of some Roland thing from a bygone era.

Funny thing about the ADX1 is that is was a recreation of those early 80’s drum synths (Linn Drum, Simmons Drum, DrumTrax), and was reissued/cloned by Mode Machines just recently. A reissue/clone of a recreation (which I’m wondering if they fixed the bleeding individual outputs on).

Yes!! DoubleDrummer seems the perfect Pyramid drum partner. This is what I was looking for

I also love my MicroMonsta, it has such a nice sound. Looking forward to the first DoubleDrummer sounds.
Could be really cool – I just wish it had more than two outputs.

Maybe there will be Digitakt/overbridge thing to send to separate audio interface outputs? Dreamland.

My perfect virtual drummer is BATTERY 3 by Native Instruments.

I’ve got dozens of kits. The best sampler IMHO…but software of course.

In a few days, my Pyramid arrives and I will use it with an Elektron Machinedrum, I think they will do a great couple!

Nord drum 2 is perfect but subject looks fine, I think I’ll buy one)

I think you’ll be very happy. It’s a great combo. Pyramid will give a new life to your MD (cc from Pyramid will give you triglesstrigs, you’ll have more lfos’, arp, polymetry and polyrythmes, and more).
So much fun

i really understand the thing of the module!
Easy to think it is more clean and contained a MOdule which has no sequencer in. Same for a synth.
BUt after a while I arived to think that each of a drum whatever or synth is cool with their own inner sequencers.
When they got it you can actually trick on them and you don’t have to push all time on pyramid.
I was one of those imaging to buy a module. Today I say: naaaaah ! why? muting(unmuting on the same drummer, having fun on them, let their pattern contemporary to the pattern we created on pyramid unlish a real fun mixing two sequencers and obtaining sort of microtiming… to have sequencers on modules its good for live purposues… I will try to buy modules with playable sequencers in it, as much as possible. I mean really you don0t wanna compare the fun you can get out of Elektron drum or with a Electribe ( with its pattern set) with a stable module as a nord drum. with all respect for the potential of this and similars. … and just to say… if you got modules instead of drummachine you rather better choose for knobby one !!

Drum machine sequencers are incredibly varied in operation. Even within a single company’s range there can be many different styles of workflow. I love the way the R-70 ran, but can’t stand the R8 to the point of not using it at all (it’s sounds are horrible to my taste, including the cards). The RY-30 has a little bit more usable sequencer but really excels as a drum module with a MIDI channel processor built-in. I’m currently hunting for the rack version of it after mine sorta died. The Rhythm Wolf has a really fun drum sequencer that I use along side my Pyramid and BSP. Running more than three drum machines starts to get messy I feel.

I’ve spent a long time trying to find a good realtime drum sequencer but feel as though the search is over with the Pyramid added to the RWolf and BSP. Perhaps in the future I’ll find a drum sequencer that will slot in with those three, but I’m pretty sorted as I am now, with my eyes looking to sequencerless drum modules as future percussion expansions.

Thanks for sharing. Sounds nice!

Manual (preliminary) for DoubleDrummer here:
https://www.audiothingies.com/dl/doubledrummer/docs/doubledrummer_manual_1.0-preliminary1_en.pdf
Also, we now have the man himself with us. Hi, @elektrosamplist

I like how the tom voice is divided in three separate pitches within the monophonic voice.
A lot of the stuff and the UI is taken from the MicroMonsta, and that’s a good choice.
The double tap shortcuts for FX sends and so on are a clever idea, too. Should make it pretty playable!

The 6 drum voice + 6 sample voice layout would work well with an external controller like the Bastl 60 knobs. It has 6 rows of 10 knobs each. Maybe it’s finally time to ditch the LXR…

I was keen on this but the lack of EQ in the mixer puts me off. With no individual outs I’d be looking for a way to EQ each instrument. 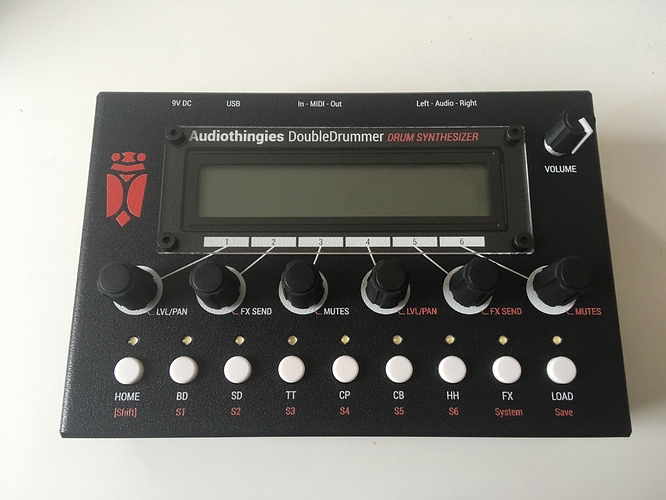 Had a very, very brief run over the functions/sounds and my first impression is that it sounds very nice!
The synth engine is not as deep as in LXR (No LFO’s for example, but that’s possible with Pyramid anyways).
It’s very playable. The selected values for each instrument are well thought out. I could not produce sounds that are totally whack/broken sounding. That’s pretty easy to do with my LXR. Think more in the range of an analog drum machine than a crazy drum synth with FM and all that.

The UI seems clever as with the Micromonsta, so you know where you are at any time. The selection of samples is also nice and useful.

Not a lot of factory presets, just four kits. We were spoiled with the Micromonsta, which had hundreds of very(!) nice and deep presets. I don’t mind, because I rather roll my own anyway.

Didn’t spend much time with the onboard reverb/delay fx yet. I would be lying if I’d say I didn’t have the instant wish to add reverb/delay with my OTO Bam/El Capistan. So I did. Was kind of missing the oppurtunity to just affect certain sounds and keep the BassDrum dry and tight. But I know that beforehand that that won’t be possible with just L+R out if want to keep the sounds stereo and not hard pan the sounds left/right for wet/dry.

I hope for me it will be a nice box, because:

In the end, it will come down to a combination of 2 drum boxes, so I can always keep bassdrum and certain sounds on the tanzmaus dry and put the DoubleDrummer through effects, dub-style. Or vice versa.