I’m wondering which tricks you all like to use using the Hapax midi effects?

Especially which combinations and in which order and for what purpose?

I thought maybe if we share these tricks, we can learn from eachother, as I personally feel that I’m not fully exploiting the fx yet.

I do like to use harmonizer, then scaler and then arpeggiator, sometimes with chance somewhere in between. But as I said, I barely scratched the surface, so I’d love to hear your golden combos

I am waiting for the Delay effect to make a reappearance… I never realised how often I used that on the Pyramid until it was gone.

But I also use the Harmoniser loads, and the arpeggiator. I also like the Radomiser set to push notes up an octave or two a every now and again, especially on basslines, sounds really good. Also velocity if you have it mapped to cutoff or something similar.

The new Euclid one is pretty good for putting in a simple sequence then have it stab in the note on its own rhythm, found some nice effects there, too. Found it a lot more useful than the old Pyramid one.

I don’t really use chance as often as I’d expect.

The LFO is really useful for stuff that doesn’t have one itself, or doesn’t have a S&H waveform on. Clocked S&H going into a cutoff gets that lovely SH-101 sequence goodness.

I don’t normally chain effects too often, although harmoniser into arpeggiator is the obvious combo.

I like almost always sticking a scaler at the end, since the harmonizer doesn’t really adhere to scales.

Apreggiator into chance is pretty good, to produce some random pauses in your arpeggios.

What do you get using the Delay effect in Pyramid?

It’s basically a MIDI delay, so will retrigger each note a set number of times with a set clock divide (with descending velocity if you wish)

Found it surprisingly useful, in that I’d come up with a bassline, and then think “wonder what this sounds like with the delay?” and it would quite often sound better, especially through a random arpeggiator or randomiser effect afterwards. 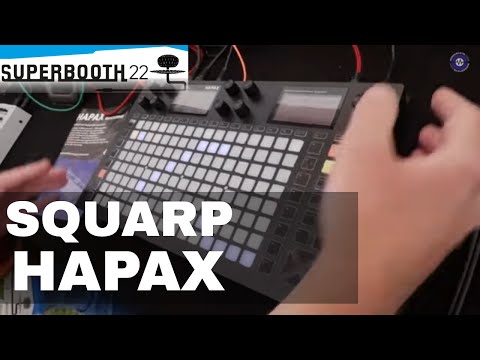 I used this a lot too when I had a Pyramid. I think Squarp already confirmed that Delay is coming in a futute firmware update?

And even just an Euclidean algo so could create melodic Euclidean sequences in a more destructive permanent way, we need a thread for algo ideas

we need a thread for algo ideas

Please do, we released 1.0 with only the few that were ready to introduce the concept, in the hope that y’all would come up with cool ideas as well

What about an acid bassline generator algo? A monophonic melody generator with parameter specifically for generating an acid style bassline:
Root note
Note density
Monotonal % (how many notes will stay at the root note, only transpose octaves)
Octave range
Normal velocity
Accent velocity (127 by default)
Accent chance %
Slide chance % (will overlap the note to the next note)
Gate length (for notes that don’t slide) (50% by default)
Etc

Please open a dedicated topic or send a feature request. This message will easily get lost in this topic about FXs.

Actually playing around with a “arp”>“swing”>“euclid” chain.
seems like fun…

Not an FX trick, but a Generator trick (maybe we should have a separate thread for that too)

Strummed Chords:
Program chords into the sequencer. Highlight the notes you wanted affected - all notes works great, as does all notes except the root notes. Go to Curves Generator, and set the destination to uTiming. Adjust the Range, Timing, and Shape to your liking. Random works nice, as does Ramp.

Was going in and adjusting the micro timing on each individual note by hand, when I realized 1.) I could select multiple notes/areas at once and 2.) I could just automate the process by using the Curves Generator.

How to automate velocity?
Or quickly “draw” it in like in drummode. Is there a way?

I would love to see that too. But: it only makes sense in monophonic tracks.

Since the melodic tracks in Hapax are called “polyphonic”, I hope a “Monophonic” track type is also coming, which could include this velocity view. And slide view (for 303 style basslines), maybe even octave view for easy transposing notes up/down 1 or more octaves.

the way it works in drumtracks could also work with polyphonic tracks.
Why would it make no sense in a polyphonic track?
simply select a row and adjust the velocity of the notes in that row just like in the drum mode.
It would make no difference if it is a “drum”,“mono” or “poly” note.

Thought I’d post this in here. This has been my first full weekend making music for its own sake with the Hapax in a long time (mostly had ‘stuff’ I need to achieve, so was trying to do that quickly, and not just messing around.

But a good little trick I have found is having a long chord playing into the arpeggiator, and then a note (or more) above the main chord, and set it just to be played on a Fill. Then you have a little button to add an extra bit of sparkle to your arpeggio, that you can drop in and out at will. Simple, and nice effect.