Apologies if there is already a topic specific to this…

When Hapax was revealed, many (including myself) were disappointed to hear about that limit to 8 patterns per track per project. I have read about some workarounds such as using more than one track on the same midi channel to double the number of patterns. Or using a second project since two projects can be loaded at once.

Has there been any further word on the subject from Squarp themselves? I presume that someone has filed this in the suggestion box, but wondering if anyone knows if Squarp has been receptive?

I understand that for some, this limitation isn’t a concern, but for many of us, it definitely is.

i think Squarp has been mostly busy working the identified bugs out of the OS after the initial rollout before addressing any new features requests. it’s only been released for a few months

As someone who is not involved with Squarp in any form other than a customer, I have been chatting to them regarding the OS since the Hapax came out (and previously talked to them regarding Pyramid a few times) that they are great guys, work really hard and are very open to suggestions (although obviously it’s still their product, so they will sometimes say ‘no’

The OS updates so far have been almost entirely bug fixes, and it seems that they’ve been mostly resolved now, so next updates should start to include new features. If you look at where the Pyramid started to where it ended up, I have a lot of faith in them to make this thing even better, hopefully including more than clips per track, which I do think is a bit too limited (although obviously workarounds by having multiple tracks per instrument or as you say, two projects as two ‘pages’ (although I am guessing from a user-interface way, that’s not too dissimilar to having two actual pages of clips for 16, etc, even though then it would stop you actually loading two projects at once if you have to use both for one real project.

Basically, I have faith, and recommend just asking them (if you haven’t already) because the more people who ask the higher something is likely to go up the roadmap (obviously also related to complexity and how much they are into it)

But for me 8 clips is enough anyway. I am glad they did the clip/track lay-out like they did and not mirrored (16 clips per track, where each track is a row).

I def could use more than 8. Already running into limitations.

I ordered a Hapax in spite of this limit sounding like a potential dealbreaker. I’ve been dependent on my Pyramid for a couple years. The length and number of tracks made me choose it over everything else I considered.
I hope Hapax works for me. Besides the length limits, it “fixes” almost every issue or wish I’ve had for the Pyramid.

for current Hapax users, is there anything in your experience with the workflow that would preclude the use of “pages” to essentially multiply the 16 tracks/8 patterns base to 32/16 etc.? basically in the same way the < and > buttons on Pyramid allow you to scroll between 16 Tracks across Banks A, B, C, and D, could Hapax (theoretically) have four pages of the 16/8 grid?

Only that you lose the ability to see everything on one page.

I do have to say, clips per track is not actually a limit I’ve reached yet in my use of Hapax. It did really feel like a limitation, but - at least in my case - it’s not proved to be.

If I’m approaching it from a ‘song’ point of view, then it’s a project per song, and you rarely need more than 8 variations of a melody/bassline/beat/etc for a whole composition (guess unless you’re into Prog) and then switch between Projects to chain songs (as it obviously the design). And when I’ve been working on a live set, I’ve just been using multiple tracks to control the same things, as in a live situation I am only going to have 3 or 4 bits of gear, so plenty of spare space along side.

Obviously, this is my use case, and your mileage may vary.

However, two things I would love (which rank higher than ‘more tracks’) is being able to toggle clips on and off (Pyramid clip style) rather than having to mute a whole track or select an ‘empty’ clip, and being able to change clip colours to help you see what is what (like you can on the Novation Circuit)

I agree that in Pyramid I’m rarely using more than 8 patterns for instrumentation, but where I foresee bumping up against that limit is with drum tracks (fills and building up a rhythm track sound by sound can eat patterns quickly) and triggering samples. but yeah not sure how moving between multiple grid views would actually work in practice, especially live

You know that you can mute drum lanes within the drum tracks as well? This is currently only on a clip basis (so change the clip and the mutes revert to what was in the clip you select, rather than whatever is currently muted) but it does save your mutes within each clip, so you can cycle through various different configurations.

Also, the FILL and /FILL MATH conditions mean I’m never taking up a pattern for fills. 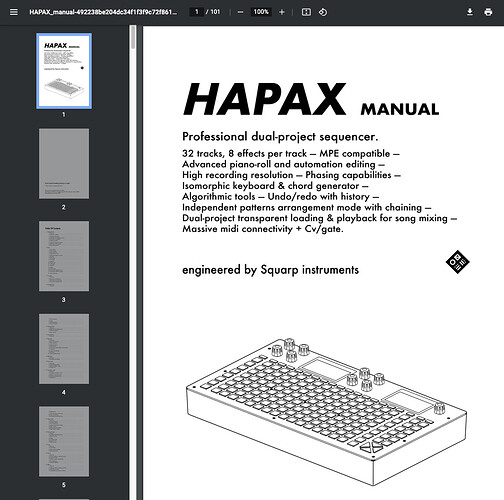 Because there are two projects, you effectively have 32 concurrent tracks.

Maybe another workaround : With the fill and math functions it could be easy to “double” the amount of pattern ;)…but then there is is a “toggle function” needed for “fill” so you dont need to keep pushing the button.

as I eagerly refresh my Hapax’s DHL shipping status . . . have current users come up with any other creative workarounds to the 8-pattern limit (other than doubling up with multiple Tracks for the same device or across multiple Projects)? playing with Pyramid I’m realizing that my sample-heavy tracks (intro, multiple verses, chorus, bridge) are likely to bump up against the limit fairly quickly.

is it feasible to load up all possible note events in a single Pattern (say, five different samples that I want to use different permutations of, which might normally occupy four individual Patterns if I were doing it in Pyramid) and then mute/unmute those note events in the Sections as needed to achieve the same end result? basically in the same way Sequences on Pyramid are composed of the Tracks/Patterns in different mute states, are Hapax Sections capable of that level of manipulation on the 8 Patterns in a given track?

16 per track would really get me where i need to go in 99% of my stuff but absent that addition to the firmware . . . necessity breeds invention. thanks!

the same way Sequences on Pyramid are composed of the Tracks/Patterns in different mute states, are Hapax Sections capable of that level of manipulation on the 8 Patterns in a given track?
I think Hapax sections would be the same as Pyramid sequences. You can mute a pattern on Hapax but not individual notes in a pattern, the same as Pyramid.

2 projects for a single song isn’t ideal but it would double the number of patterns and tracks.

There is a “Fill” button that you can use to play notes that are marked as “fill” (and not play notes marked as “not fill”). That’s also not perfect but may get you some of the way, depending on how different your patterns are.

I tended to use a lot of tracks on Pyramid because I could. I would err on the side of more tracks vs on the Hapax where I’m trying to use Fill, Chance, and Math more often.

If you can go into more detail of what how many tracks, how similar/different they are, etc, I’d like to think it through. I’m sure others have ideas, too. I’m currently doing more new composition on the Hapax than moving older projects over. I want to make sure I know what I’m doing before I start moving my Pyramid projects.

i stopped writing stuff toward completion on Pyramid when i knew Hapax was going to be my ultimate sequencer, so planning to rebuild from square one on them anyway.

but for one non-Drum Track example, doing a remix with vocal acapellas on a single Hapax track, at least four of the patterns are likely to be committed between two or three verses, one or two different chorus refrains, possibly a bridge. and then there are typically one to four variations of intro type patterns with vocal samples that aren’t the verses or chorus. even from jamming around on Pyramid a bit with a few tracks, i easily fill up the first 8 patterns on my vocal tracks without trying too hard. less of an issue with single-instrument tracks but drums and sampling typically have multiple variations on themes that i can foresee needing more than just 8 per track (though loading every component up on a single pattern and then muting externally on my RD-9 or MPC is always a workaround but also increases the odds that i’ll fuck it up live exponentially)

I do believe that the Pyramid is much more suited to free-form ‘songs’ than Hapax. The Hapax is definitely more geared towards repeating loops and variations in those loops, whereas the structure of Pyramid, although it could easily do that (its how I used mine) it seems more suited to the idea of having almost no limitations to structure.

Which goes to show, Hapax is not Pyramid II by any imagination, it’s a different beast.

Fortunately for me, it refines what I did on the Pyramid, but if you used the Pyramid in a different way, can imagine you bumping up against certain limitations which did not exist in Pyramid.

Although I will say (again, at least for me) the Pyramid was a lot easier to just play random jams into without thinking too much, then editing them afterwards. Maybe because it was so simple in terms of track layout, felt more freeform, whereas on the Hapax I feel I need to spend more time planning stuff rather than just hitting record and going for it.

One way to handle it is to separate the “composition” and “performance” phases. I always used a ton of tracks in Pyramid that I ended up not using later as I nailed things down. I resample a lot so some multi-track/pattern parts would end up being a single sample so where I might have 4 vocal parts or multiple drum tracks while writing, I would resample those into a single part later.
That’s one possible partial workaround. Another would be to combine sections. If the structure of a song is set, you could combine 2 consecutive verses into a single pattern or something similar, even if only for some parts. For longer patterns, turning the tempo to 50% allows longer patterns. Not ideal but I got used to doing that before Pyramid because of the sad limitations of my previous sequencer.

But I have to admit, I didn’t even attempt my last remix on my sample and Pyramid, I did it all in Logic because I’m just not good enough to do it all on hardware.

For me, Hapax is easier to free form jam because the Pattern view is easier to work with and the Live view is so much better. I prefer the Hapax pads over the Pyramid X/Y touchpad for automations. Chord Live view is my favorite composition tool, possibly ever. (You may have guessed that I don’t use an external keyboard/controller, I use the Hapax/Pyramid pads for playing notes). Ask me again in 3 months how I feel about this, after I have started writing 20-minute high-tempo metal epics on Hapax.