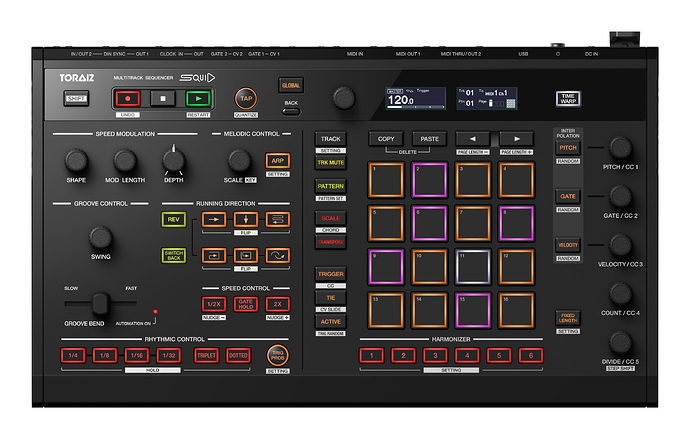 coincidence?? I think not!

I did read through the squarp manual and the polyrythms for the different tracks seem to give you a way to do that. So I’m trying to see the point in add that feature.

Seems to me the layout is geared to short 1 bar loops ?

I did read through the squarp manual and the polyrythms for the different tracks seem to give you a way to do that. So I’m trying to see the point in add that feature.

I tried everything … I couldn’t find a way.
Would you explain me how this could be achieved?

I’ve only read the manual, haven’t had a chance to use a squarp yet, I’ll see about that later this week when mine arrives.

64 steps is a fundamental limitation. Sorry . Too many sequencers have this limitation and this is why the squarp and a couple of others are on hallowed ground as far as I’m concerned.

except for Euclidean Patterns … wich doesn’t help too much

I’ve purchased a Toraiz Squid which is now sitting next to my Pyramid and I wanted to report on how it compares. I won’t go into the details of its GROOVE CONTROL capabilities as I personally couldn’t find any use for them – it’s certainly impressive to be able to scrub the sequencer playhead but I don’t see myself using it, personally.

Besides the limitations mentioned above already (mostly the 16 tracks max and 4 bars track length – although workarounds e.g.TRIG PROB make this arguable) I think that the 2 units share a fairly level playing field. The Pyramid is generally more capable in many respects (imho, that is) but I found myself wishing the Pyramid will borrow these interesting SQUID features:

Now for the things that I found annoying on the Squid, in no particular order:

All in all I think I will return the SQUID as the Pyramid comes out as a winner but there are some great features that I wish the Squarp folks will take into consideration for future upgrades! Fingers crossed.

Thanks for sharing . Agree hopefully Pyramid will add some additional features on chords and direction play etc

You’ll have to set lengths on your own and if you have an existing sequence of notes, they’ll be distributed throughout the track according to where they were before the adjustment, so don’t expect the time sig change to do it all for you.

Also zoom is your best friend for getting in there.

i understand what you’re saying … but it only seconds what I’m saying … this doesn’t playback a sequence in any other speed.
You still have to do that manually.

Oh you want it to be like a performance, on the fly. Just create a pattern with the different times and switch?

I honestly just want pattern direction. The squarp is hands down the best sequencer, it opens up all my other instruments to so many things

the bpm effect would do it , but as its tempo is an absolute value it’s useless for me.

It doesn’t record anything but incoming notes. No CC, no aftertouch, just note on/off. I’m not impressed. Pyramid for the win.