Is it possible to receive sysex data into pyramid over usb?

But it’s not clear if this include sysex received over usb.

You cant sequence Sysex data on the Pyramid (not really note data to begin with).
You can route incoming Sysex to the DIN OUTs, essentially working as a THRU for Sysex.
So yes, you can receive and mirror the input to the output, but essentially the Pyramid is blind to Sysex simply because it is not note data and as its usually quite data heavy, would clunk up the RAM fast, so this most likely wont change.

Yup. That’s what I’m experiencing too. Oh well. Thanks for confirming!

any solutions here? I need the pyramid to pass along some sysex messages via usb. is there any hope?

same here, i wanted to send midi tunings from scala, thru the usb to the din midi out A, but no cigar.

would have made life so much easier… any chance for midi mts thru pyramid? please!!! i’ts not even sysex…

yup, that’s exactly my predicament. Just got a Hardware tuning box, and want to pass MTS to my Micromonsta and some others. Works fine with midi A and B, but those are reserved for my two multitimbral synths.

I wonder if there is some reason for the omission.
Guess I’ll email them and see if there’s any possibility of amending this

waiting to hear back… just curious though, has anyone here successfully passed sysex through outs A or B?

I’m not very knowledgeable about sysex, but something screwy is going on. If I connect the TBX2 directly, it sends MTS tunings just fine, but when routed through DIN in, out to DIN A or B, the message is sent, but the tuning is getting scrambled, resulting in a microtonal mess. So it’s clearly sending something, (even the midi monitor doesn’t show anything) but it’s not sending it correctly.

I wonder if there is some reason for the omission.

there is always a reason developers don’t include functionality

in this case its likely, this is because sysex is handled differently on USB to other midi messages, all other midi messages are sent as fixed 4 byte packets for one message.
to receive sysex you need to handle multiple of these packets, with different header types, which allows the arbitrary length sysex to be ‘chunked’

this means to send usb midi ‘thru’ to midi din, you have to parse the packets and then ‘repackage’ it for the serial din.
rather than midi din (which is serial), where midi thru, is simply a matter of sending the data thru one byte at a time, without any care of what it contains.

its not that difficult, but it is extra code
(and extra code = development effort, which has to be prioritised against other functionality)

oh and you have to be careful that your design does not require you to cache the message anywhere e.g. ring buffers, as sysex can be arbitrary size, so could cause memory issues - so this could mean the design has to change/be adapter to do sysex, which could be more work.

…so i’m back to using my midiman 2x2 with a 2way switchable midithru box, where it’s either the computer or the pyramid sending midi. so i switch to A, computer, send tuning with a 15 years old box, when i done, i switch to B, using my brand new sequencer.

i love my pyramid, but… meh, you know what i mean. squarp, please… i don’t want to store and sequence sysex or mts, just let it thru the seq…

I think of midihub as an “intelligent” router… basically a combined splitter/merger, when you can control not only the routing, but also ‘massage’ midi messages, or route conditionally.
so for something like this, it can be configured to normally route via the pyramid, but for sysex coming from the usb (only) bypass the pyramid.

Ive been helping beta test the midihub, and it works awesomely with the Pyramid, giving me 4 extra DIN I/O and extra USB device support, and also deal with the various ‘quirks’ that some instruments have (*)
( * ) and my experience is most synths/sequencers all have there little idiosyncrasies : ) 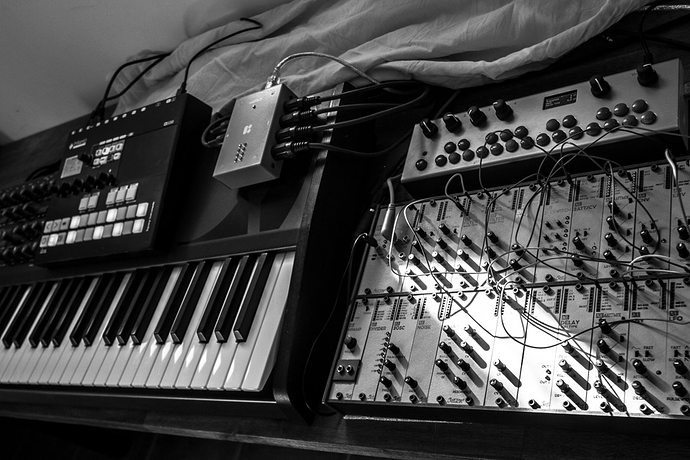 thanks technobear, it better power the pyramid.

its a usb device, not host … so you would plug it (and power it from ) whatever your currently plugging the pyramid into… (im using the organelle here) , then use midi din to/from the pyramid.

its a pity, I have registered my (very strong) wish that the next version should also has usb midi host abilities

I have unsuccessfully passed sysex tru the midi dins! It looks like pyramid can’t handle because it causes any patterns playing to go all weird and out of sync.

I’ve given up on getting sysex to pass tru pyramid.

Jean sent me a test OS that seems to have fixed MTS transmit. It’s working perfectly now, so I imagine that will be added to the next update.

it fixed my issue, but that doesn’t necessarily mean it will fix all sysex related problems. If you have a specific problem it’s always best to contact them directly. I’ve found squarp support to be super helpful. They really do listen despite the fact that they don’t have much of a presence here.

So did anyone tried sending sysex thru the 3.10 os? it’s not listed in the bugfixes, so i’m kinda just hoping it does, i might have time to update in the coming days, not yet, just curious… would make me really happy if it would do that.

Yeah it would make me happy as well