Before I zone out deep into troubleshooting, I wanted to ask if anyone has encountered any “oh geez this is just slightly out of sync, but doesn’t drift” issues with the Pyramid driving their gear.

Pyramid is my master. All other devices are configured to receive stop/start/clock and only receive MIDI. Nothing sends MIDI back to the Pyramid (yet.) I’ve tried different cables.

Using the same sample or patch on both the TR-8S & MC-707, with the same simple pattern (tight snare on each beat of 4/4), I hear a noticeable flam (monitors and cans) between the two devices. The flam is consistent and does not drift over time.

The Pyramid is only sending start/stop/sync to trigger the same pattern on both the drum machine and groove box.

All devices are using the most recent firmware.

Anyone notice anything similar with their gear? I really doubt it has anything to do with the Pyramid, but did want to at least solicit opinions and advice here before having to weed through the kids’ on the other devices’ group boards.

But my midi mergers are tricky, Kenton 1x5 always perfect, midisport 2x2 and subzero is disaster zone when turned on after the keyboard or pyramid. Half a second delay sometimes. /in fact I don’t know why but turning on midi boxes first helps/

I hope it helped

Interesting note regarding the power-on order. I’ll try that as part of my troubleshooting.

Thanks for the suggestion.

I’m having exactly the same problem syncing my Pyramid mk3 with my MC-707.
Seems like a few ms out of sync with the Roland internal sequencer.

Did you ever solve the problem?

Happy to hear it’s not just me. I have not solved it. It’s tolerable enough for what I’m doing since it doesn’t drift, but it is still annoying.

The issue is not with the Pyramid, from what I can tell. I pulled it out of the setup and pushed sync from my TR-8S to the MC-707, and the same minuscule timing issue is present.

If I had to guess I’d say it’s the MC-707’s fault. I do need to start that conversation on those boards and dodge all the “works for me [uploads instagram-worth pictures of their setup with unhelpful response]” posts.

I’m going to try to diagnose a bit more today.

I can hear an obvious timing difference between the start of each kick and it sounds sloppy, but it doesn’t seem to get worse over time.
I’ve disabled all swing and tried quantizing everything, to no avail.

My guess is that there’s a latency issue when starting the mc707 sequencer, but not sure if that’s caused by the Pyramid or 707.

This doesn’t happen using only the mc707 internal sequencer, the kicks on both channels are triggered exactly on time.

I have removed all other connections other than midi out from Pyramid into Midi in of the Roland and am monitoring via the 707 headphone port, so the issue can’t be caused by anything else than 707 or pyramid.

If this can’t be resolved, it’s going to make one of those devices utterly worthless to me.

I’m going to try to make time to downgrade the MC-707 to the previous release to see if the issue is still present.

Your test case seems very solid. I’d be curious as to what other steps you take.

Frustrating all around. It’s not unreasonable to expect solid timing when using multiple modern devices to create.

My money is on the Roland having a timing issue.

There have been a few responses.

One sub-thread emerged that may be relevant to your test case: 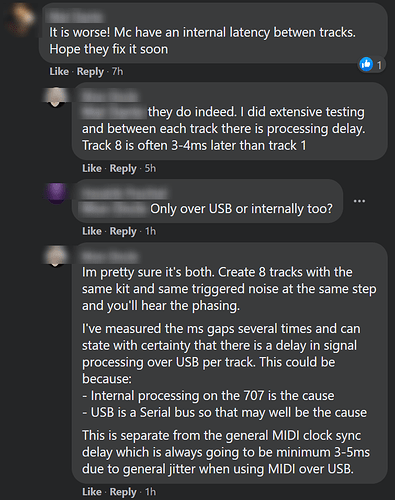 And this response from a Pyramid user which implied everything is fine, but confused me a bit. 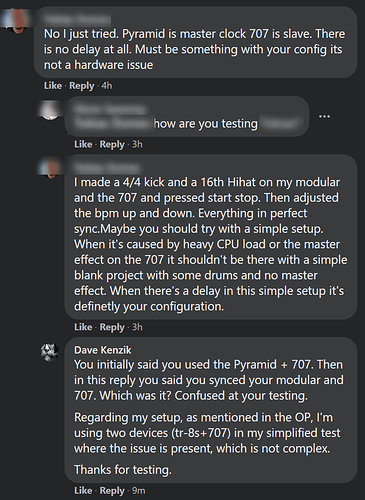 There was another response stating they use the Pyramid and there are no issues, but “trying to play the same kind of pattern and sound will introduce always latency and a phase.”

One overarching issue that I found was my MC-707 had swing set to 3%. After changing it back to 0, things got quite a bit better, as one would imagine.

Since I’m just using the MC-707 as a multi-timbral sound module, I’m satisfied with my setup for now.

Hope others fair well, as it does seem there is a known issue between tracks.