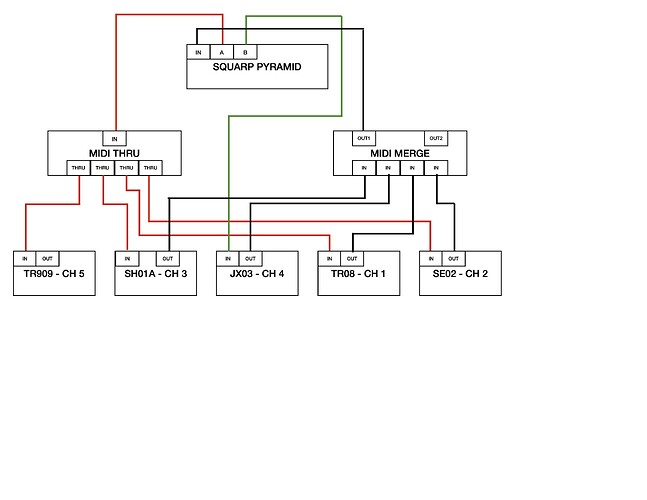 Great diagram! Having so many devices sending their MIDI out to the Pyramid MIDI In creates many opportunities for the problems you describe.

You’ve covered the channels, but there are other things to check:

I hope this helps.

Thank you for getting back to me. I will go through your suggestions and report back.

No change sadly. I feel like I may have made the situation worse. Now when I hit play on the Pyramid, the clock sends a signal out to the TR08. The TR08 plays whatever track it has on it internally and in doing so, that track sends midi signals over to the SE02 and the SE02 plays the same midi notes. This is driving me crazy.

What’s missing from your report is specifics about your settings.

This is a big ask, I know, but if you are willing to list the values of every MIDI, clock, and sync setting on every device, I’m pretty certain I can help.

As I alluded in my first message, you have the ports connected so that every device can send MIDI to every other device. That’s a recipe for problems unless you are very knowledgeable and meticulous about configuration.

This is key, really. What do you actually need all of the Midi Out->Pyramid In connections for?

Some Roland Boutiques echo out everything they receive via Midi In, which will cause issues, especially in setups with only dumb Merge+Thru boxes and no filtering. Unless you specifically wish to record notes/cc coming from your Boutiques the fastest way to fix your setup might be to simply disconnect their Midi Outs.

I was able to work it out. I was fooled into thinking that there was something wrong with my SE02. It has fooled me before, but essentially, the built in sequencer of the SE02 was playing the default sequence programmed into it. I thought MIDI notes were being sent from the TR-08 because of the MIDI configuration, but it turned out not to be the case.

It sounds like I can simplify it by getting a MIDI Keyboard and do away with the keyboard extensions for each synth. Do I have that right?

Oh, alright. I mean it is kind of nice to be able to play them directly. Your routing makes sense now. And it looks like you’ve solved your problem anyway

That autoplaying sequence on the SE-02 has fooled/annoyed me quite a few times as well, btw. I managed to delete it eventually.

That autoplaying sequence on the SE-02 has fooled/annoyed me quite a few times as well, btw. I managed to delete it eventually.

Please tell me how you managed to delete it. I never use that function and would love to never have to think about it.

There’s a manual addendum pdf which explains how to do it. Make sure you have the latest firmware installed first, it won’t work otherwise.
Press [NOTE]+[GATE], then press [9], then [VALUE], then press [VALUE] again to confirm. Then save the pattern: [VALUE], [0], [VALUE], [VALUE]

So have you got all those outs now sending midi back to Pyramid correctly now?