I wa wondering if you could help me out, I have a small setup for travel consisting of the pyramid and an akai mpk mini which I am using through logic pro.

Is it possible with this setup to send chords/notes/record into the live mode/euclidean on the pyramid using the daw in the middle? So, usb keyboard > logic > pyramid?

Also, can it be used to trigger the pyramid?

Thank you for your help.

I’m not a Logic Pro user myself, but this link looks like it could be of some help: 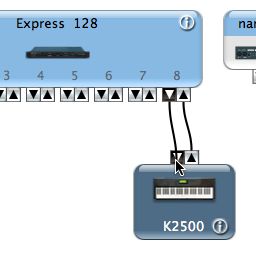 You basically follow the steps, but replace the midi out port with the pyramids midi out, and that might do the trick.

I use a similar setup that your post suggested with Ardour DAW on Linux, where i just open “midi connections” and add a selection to connect/route midi-in from usb-keyboard to midi out of my usb-midi device that connects to pyramid. In pyramid I can use either echo-on/multitrack-off setup or echo-off/multitrack-a,b…etc, depending how i want the channels to work.

In first option with echo-on, it always sends to Pyramid’s active track’s midi channel regardless of keyboard’s transmitting channel, and in multitrack mode the keyboard’s midi channel is used to select the destination track/channel.

in addition I’ve selected for my DAW to send midi MMC/MClock to MIDI interface that is connected to Pyramid. And have DAW as my master clock.

thank you for this, I’ll give it a try - i dont have my midi interface here, so i’ll need to route to the pyramid via its usb if it is possible. I bought the pyramid whilst I am away from my setup, so i havent even been able to use it with my hardware synths/drum machines/fx yet - just with vst’s - but its still been pretty rewarding and a good way to learn the unit.

okay, i tried a few things to get what i wanted on Logic pro. eventually I created the connections quite simply in the logic environment.

I have listed the steps below incase anyone else wants to know how to do this on logic in the future, Im sure there may be a better way, but this seems to work and is pretty easy even though it uses the environment:

There are other settings on the pyramid and in environment to send the input on different midi channels/tracks as you wish, but this covers the basic connection. If there is a better way, please feel free to correct me or remove my post - I’m no midi genius by any means.

Thank you for posting the solution!