I am new to the Squarp Pyramid and I am already loving it!
However I have a problem with midi-in latency. Since I am more of a keyboard player, it is very annoying that all the synths react to the midi data with a slight delay.

When I play from the Master Keyboard there is a slight delay. When I play with the Buttons on the Pyramid, there is no delay. So I guess the problem is the midi in reaction time of the Pyramid?

Are there any settings I could try? Maybe to filter the midi data on the Pyramid’s input?

Apart from this, the Pyramid is just amazing

Thank you and all the best!
Jonas

It happens sometimes, not very often.
Causes to my knowledge:
1- The order you’re turning on your gear >> wait until the screen is ready
2- cheap midi boxes between keyboard and pyramid

Thanks for your answer

I will try experimenting with the order of powering up the gear!

I did expect the Midi box to be the problem. I have a Kenton thru 12 between the Pyramid and my Synths. However I unplugged everything and tried a setup with direct in and out as stated in my post:
Midi Keyboad –> midi cable –> Pyramid –> midi cable –> Synth

The Problem remains exactly the same.

Since the latency only occurs when the Pyramid is triggered by an external device, the latency is probably happening because of the midi in processing of the Pyramid.

I also tried different external devices as a master keyboard and different synths as a receiving gear. It all comes down to the input processing of the Pyramid.
That’s why I was wondering if there is a way to make this part more efficient.

Also I have to mention that the latency is quite small. But it makes playing funky stuff very difficult.

Do you have Quantise/Humanise or any other MIDI FX on your Active Track?

No Midi FX were activated.

I did check that too.
It is basically an empty template without any recorded stuff or activated midi fx. Still there is latency.

I have a MK3 by the way. Although I don’t think this makes any difference since they are all pretty much the same.

Okay, that must be frustrating.

As tests to narrow it down, maybe:

Im not sure where else to go on this, so hopefully someone else has some input

What do you mean by latency? The turning off order supposed a significant latency about a second long I experienced many times until the power on issue was discovered and sorted out.

And one more thing I remember: check the display when the little triangle appears as you press the key (midi in) and the second one (midi out) when you hear the sound. My latency was that kind of one.

Do you have more info in this?
I have a “sequence” for turning everything on that i follow religiously, but i thought it was either autism or my own superstition.

To isolate the source of the problem I removed all the the unnecesary additions. The signal path was as follows:

I tried different midi sources and different synths. When I play the synth with the buttons on the pyramid, the latency does not seem to occur.
So my conclusion is, the latency is happening when the Pyramind processes the midi in data.

The latency is very short, but as I said, it makes playing funky stuff very difficult

When I connect my midi source (master keyboard) to my synth, the note I play will immediately trigger the synth. This to me is 0 latency.

When I have the midi source (master keyboard) connected to the Pyramid and the Pyramid connected to the Synth, and I trigger a note on the midi source (master keyboard) the synth will react with a slight delay. It is a very slight delay, but it makes playing in live mode feeling weird. Especially when playing funky stuff with fast rhythm.

My setup was a Kenton 5-1 and a midi sport 2x2 combined with a subzero 2x2.
It was used to combine CC from keyboard + clock from looper >> pyramid midi in

Kenton was the distribution to synths from bank A. 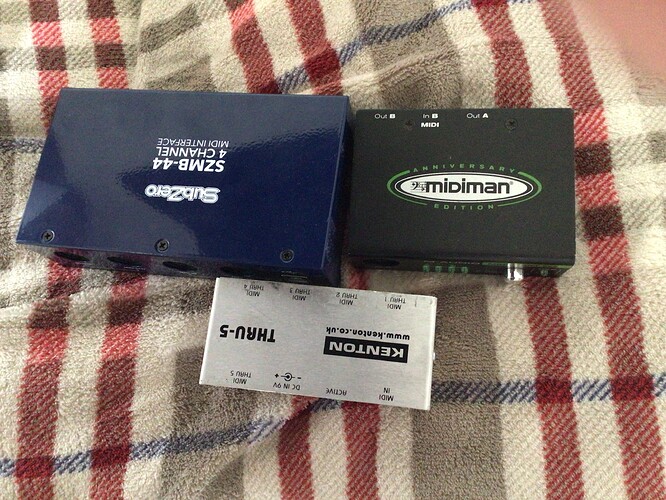 I am not at the studio right now, but I will try this later today!

Thank you.
When i was experiencing problems i was using the same MIDIman.

Kicking that out of my system fixed many problems for me

Just a random thought, sorry for the piecemeal: latest version of PyraOS?

When I connect my midi source (master keyboard) to my synth, the note I play will immediately trigger the synth. This to me is 0 latency.

When I have the midi source (master keyboard) connected to the Pyramid and the Pyramid connected to the Synth, and I trigger a note on the midi source (master keyboard) the synth will react with a slight delay. It is a very slight delay, but it makes playing in live mode feeling weird. Especially when playing funky stuff with fast rhythm.

every digital system (midi is digital

) has latency, generally id not be expecting > 5-10ms , you could ask Squarp (via the contact form) exactly how much end to end latency there is.
generally, I dont feel latency with the Pyramd and its not a frequent issue Ive seen raised on the forum, so id say most feel its ok. ( * )

I’d say if you can feel latency, then it might be some how you have a lot of midi messages flowing thru the system, or some kind of loopback… midi is serial, so excessive messages will delay your vital messages like note-on.

on the rare occasions I felt latency, its always been a routing issue… and some how my note-on/offs are getting bounced around - this done indeed create some wierd feeling in timing.

to isolate to pyramid,
id make sure you connect both controller and synth directly to the pyramid via midi din, to ensure no other ‘device’ is causing the delay.
make sure you dont have any possibility of loopback (so sound source does not connect back to pyramid in)
turn off all midi messages except note on/off
then look at the messages coming in/out of the pyramid (settings → info) , look for any loopbacks

another thing you can try is to use midi thru on the pyramid, see if you still feel the same latency.
(see manual)

note: this is all just to help you narrow down where the latency is coming from, since it really should not be an issue with the pyramid.

( * ) you will see talk of latency with regards to computers, mainly due to USB - but this usually is ‘seen’ rather than felt e.g timing differences between midi sent out, and audio coming back… this is pretty easy to spot when we have tight grids in daws, which allow for ‘infinite zoom’ … but thats a different topic.

Well, I could have an other synth module for the money but yes, all solved now…

Yes I have the latest PyrOS

Thank you for your very detailed answer.

I will try 2 things now:

Many thanks to all of you! This forum really is an amazing source of knowledge

I will do some more testing now. Will keep you up to date!