Hi everyone, new here, just got my Pyramid. I’m working on building a dawless setup just using DIN ports on the Mio. Some of my synths are older and don’t save their designated midi channels (defaulting back to channel 1 on startup) so I’m looking for a workaround. Stopping to reset the midi channels on each synth is a huge bummer when I want to get straight to jamming.

I’m hoping to use the MioXL with Auracle to remap and/or filter accordingly so that all of my hardware can remain on channel 1 and still function independently. Is this possible or am I trying to do something that midi isn’t capable of handling? My goal is to use one midi controller to access all of my synths by switching tracks on the pyramid and then having the mio remap each of those to channel 1 on its way out to each synth. My first attempts haven’t worked out for me, but I’m admittedly nowhere close to fully understanding how the pyramid (and midi in general) truly works. I’m also curious about how OMNI mode effects what I’m trying to do here. Right now I’m only using DIN ports, with my midi controller going directly into the Pyramid, with output A going to the mio and out into all of the other hardware.

Has anyone else done anything similar? Maybe my entire approach is just straight up wrong. Any tips are much appreciated!

Has anyone else done anything similar?

Maybe my entire approach is just straight up wrong.

I don’t use the Auracle interface, but the idea behind the Channel Remapping is that you can send everything on one channel, and duplicate it, or remap it to another channel. ie - sounds like exactly what you want to do.

So effectively you would program one synth on Channel 9, for example, but have the Mio remap “anything on Channel 9” to go to a specific port and Channel 1. Something-something default on iConnectivity gear where the default is ‘everything goes to everything’, but you don’t want that - you want a specific destination Port and Channel.

MIDI can be extremely powerful.
I highly recommed checking out midi.org and getting familiar with how it works.

Enjoy!
Hope this helped a bit to get your started. Feel free to ask for clarification. English is difficult for me sometimes and I fear I don’t get my point across correctly.

Agree with everything Creepy has said… My only input is that if the MIOxls scripting doesn’t perform as you need it to there are a couple of other “midi routing magic” boxes that might fit the bill. The one I’ve researched and am planning on purchasing is the BOMEbox which works with the very popular MIDI translator Pro software. Another option is the Axolotl which does more than just MIDI but routing is one of the things that people use the device for… Another one which looks like it has a lot of promise is the MIDIhub https://blokas.io/midihub/.

Thanks for the replies! I managed to work it out and of course it was something as simple as setting Midi-Out to “midi out” (rather than through+out) on the pyramid. Once I fixed that, I was able to sort out the mio routing without 8 different synths going off at the same time and confusing the shit out of me. Turning off multitracking in Omni mode seems necessary for my use case as well. I’ll probably explore those Omni features again another time and end up rerouting the entire rig, but for now, back to basics was the right idea for sure.

And woah, I remember messing around with Bome software when I was a kid. I had no idea they were making hardware these days.

Sounds you got it to work, great!

I use the mioXL with Pyramid and the routing and filtering is very easy once you understand the basics of MIDI and sources and destinations.

mioXL is in my view one of the most complete MIDI routers, RTP midi making it effortless to incorporate ipads or multiple computers into the MIDI network.

Another box that I can highly recommend is the MIDIHUB, it’s extremely affordable and can do some really neat tricks.

It’s no replacement for my mioXL but it’s a great addition to it. 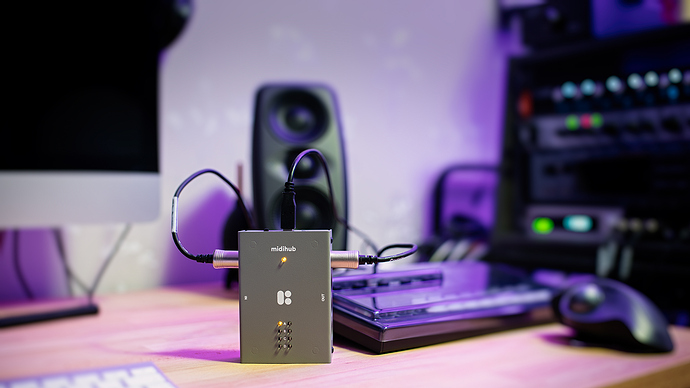 Another box that I can highly recommend is the MIDIHUB, it’s extremely affordable and can do some really neat tricks.

It’s no replacement for my mioXL but it’s a great addition to it.

Just out of curiosity, what kind of setup are you using between the two?

I just got fed up with my USB Host workarounds and limited number of DIN ports and bought a MioXL, and while waiting for it to arrive I’ve some time to ponder how to best connect it all. On paper the two should compliment each other nicely - the Mio excels in routing and MH in other kind of processing. Everybody’s setup is different of course but I’m interested in hearing how others are combining forces between these.