Noise issue when connected to modular

Hi, i sent my Pyramid to squarp becuse my cv tuning was off, after i got it back i have this noise thing going on as you can se i this video:

the noise is there even if i don’t connect any other patch cables other than squarp cv out and audio out to the modular.

Seems like a grounding issue with your euro PSU or maybe earth hum from your house.

Ye but this never happened before, been playing with it a couple of weeks before squarp took it back to fix the cv tuning and then it appeared. i been trying to use different power outlets for the squarp etc. but nothing is working

Wow, this is a bummer.

I use the Pyramid CV/Gate and ENV every day with my eurorack modular and have never experienced anything like that. I’m so sorry, what a hassle.

It sounds to me like bona fide ground looping.

I would try to get the modular and the pyramid onto the same circuit, and be sure that everything connected is grounded, and there is no larger appliance in the chain - fluorescent lights, a computer, etc.

Try to connect the pyramid to a power strip, and the modular to the same strip, and then be sure that strip is plugged into a clean circuit with nothing else connected.
Strip everything back to a bare minimum to have as few possible sources as possible to eliminate potential problems until you can see if it’s the power, the modular’s power/case/ground or the pyramid.

If it’s not the power, and it’s not the case, then something’s gone wrong in the pyramid and it needed to be repaired or replaced.

What a bummer. I’m so sorry.

Hello!
My pyramid has the same problem.
My pyramid was powered by a usb hub
Try power to the straight from the outlet, I took a fork from the iphone

Hi, I have this problem also. What fixed it for you?

First post here so apologies if it’s wrong to post to such an old thread of if the answer is already out.

I have the same problem, when connecting CV to my Moog DFAM.

An additional peculiarity is the more steps I enter (not actually running) the louder the hum gets.

Tecden commented that, as mine also is, had his pyramid powered by a USB hub so used a fork, I’m understanding this as a splitter for power supply into Pyramid while still maintaining USB connectivity.

Is it ok to do this? my head is telling me I would be feeding 5 volts into my USB Hub on a port I maybe shouldn’t.

First experience with using CV so all new to me anyway.

HI same exact problem here. Were you able to solve this?

Yea, sounds like a grounding loop. Had the same issue while attempting to send clock out from Pyramid’s ENV CV port to eurorack while powering Pyramid from powered USB hub. It used to work fine until rearranging the modules around to accommodate a new module.

Fix was easy, disconnected USB cable from hub and am powering it with from wall AC socket using wall wart transformer.

Try it. Disconnect the USB cable and use the supplied mini USB power supply instead, or try plugging the USB cable using a phone charger. If the hum / buzzing stops then you’ve isolated the issue.

I agree completely that its a ground loop. I can power it from the wall socket, but I need to have it connected via USB for MIDI. Does plugging the wall wart in eliminate power coming over the USB?

The USB port on the Pyramid functions as power and USB MIDI in/out. When plugged into the wall you will lose the USB MIDI functionality. If USB connectivity is critical in your workflow then you may want to consider using wall wart plus a USB to MIDI DIN cable (something like Roland UM-ONE mk2 USB MIDI Interface). I have not tested that product specifically and cannot say that it will work, it’s just used here as reference. Others may want to chime in to share what similar products works for them.

Arturia on the other hand addresses this issue by including a special “Y” cable with Beatstep Pro BSP cables. It would be nice if Squarp followed suit and provided a similar cable. Please note, if you wanted to pursue the Arturia “Y” cable route just know that it’s not plug-in-play capable, as the USB connector on the Pyramid is mini-USB and the BSP “Y” cable has micro-USB ports.

Hi, thanks.I really would rather not add potential jitter or hassle by going through another MIDI to USB cable. This is indeed an oversight by Squarp, but I will reach out to them and see if they can suggest a Y cable that I can get.

For now I will just have to unplug the USB when recording my DFAM and rely on the wall wart for power.

As everyone says a ground loop.

I get it sometimes depending upon what over gear I have plugged in - it’s not just the pyramid that’s the cause.

Previously I used to resort to midi din to get around it.

Then I started to connect my pyramid to a usb output on the eurorack, Hermod usually. this seems to solve it.

Recently i got an iConnectivity mioXM to route all the midi, and that also doesn’t seem to exhibit the issue - so I guess it has better ground protection?

Unfortunately, seems to depend on what you have - then experimenting to find best solution.

my organelle used to also sometimes introduce issue via audio connections but due to various usb devices attached - it’s unfortunately a ‘feature’ of usb being used for data and power.

You can easily eliminate this with a ground loop isolator on each of the CV outputs, you can pick them up for about 3-15 of your local currency’s.

This kind works ok, there are many others 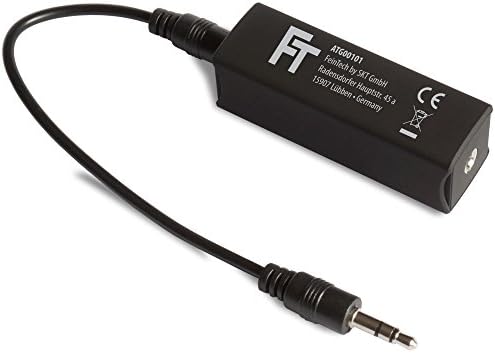 I have the same noise issue with the pyramid but I don’t have it with the beat step Pro because of their Y cable.

i also had same issue, but plugging squarp into usb isolator fixed it - i used this:

i first noticed when connecting any of the squarp cv outputs to my modular, but then also noticed same issue when using midi2 din sync ==> cv.

my theory is it is actually related to the cumulative brightness of the 16 pads - which is often correlated to # steps.