I love Jeremy’s videos and music, and this one is a gem.
This is a nice walkthrough within a musical context. 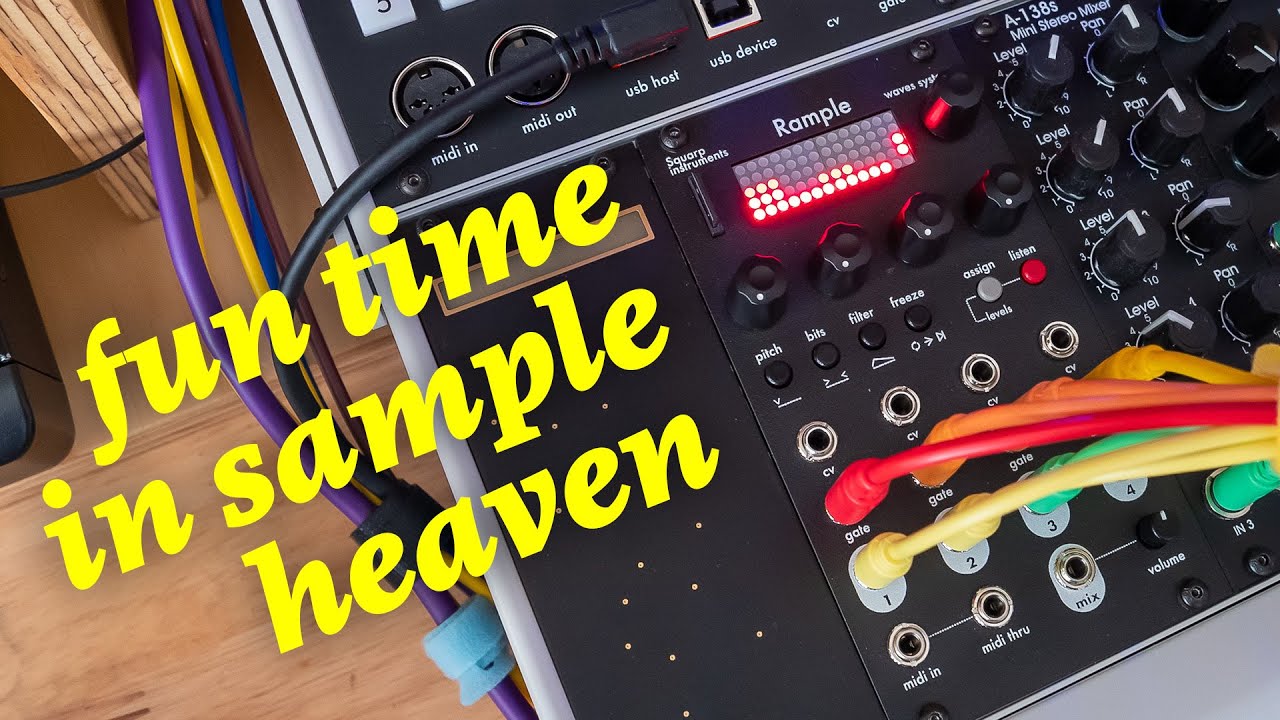 A fun & energetic review. I particularly liked the way he was using the round robin on the layers to make progressions and musical diversity and not just timbre. Nice idea.

But… he didn’t even touch on the Randomize feature which for me makes the Rample extra special. I’ve turned a kit inside out by just hitting that randomize menu option. I’m amazed at how different a kit can sound.

It’s such a good module and works great with the Hermod.

But… he didn’t even touch on the Randomize feature which for me makes the Rample extra special. I’ve turned a kit inside out by just hitting that randomize menu option. I’m amazed at how different a kit can sound.

yeah, randomise is a great feature

I mentioned to Jeremy, my favourite feature is the midi implementation, as from Hermod (midi out) it allows you to do things like velocity modulation , whilst keeping CV1-4 for other modulation from other modules.

I hope that as Jeremy continues his journey in Eurorack, he updates us on how his uses of modules changes - I find my use of modules like Hermod and Rample tend to change over time, and so I use other ‘features’.

Yeah for sure. Loopop is like watching a video manual and is also a great way to figure out if a piece of gear is going to be a good fit in your studio.

The RMR stuff is just having fun. More the Cuckoo side of life

And I agree, it does pair with Hermod really well. Love it.

Ohhh and he gave a shout out to the sample library that is on the module. I 100% agree with him, it’s one of the best libraries I’ve encountered. I normally just remove them from gear that I buy. With Rample however, it feels like part of the machine.

What does the randomize feature do? I haven’t had a chance to use that yet

Randomizes the effects parameters (so does not change kit) of the Rample, so things like filter, bit crush etc - its fun, as it really does change the sound quite a bit… and if you dont like it, spin the dice again (or reset)

At one point in the video he uses Adobe Audition to add slice points and this made me curious if there are other ways to do this.

I see mention of tools like Octachainer, and I’m wondering if there are others. Like for example, if I slice something up in Ableton, will the Rample be able to read those slice points? I always assumed that slice point information would be specific to the sampler that created the slice points and arbitrary, but if there’s such a magical thing as a [gestures vaguely] ‘Universally-recognized Slice Metadata Format’ I would be happy to hear it.

Also, like a lot of people, I bought this module specifically because of this video. Not because of the features he showed off, but because of how…musical he gets with it. Selfishly, I really wish more Eurorack reviewers would focus on softer, more melodic content because I can only take so many blaring car alarm/zip-zap/laser sounds.

I might be wrong, but the Rample does not read slice points. Instead it just pre-slices existing audio files into X number of slices. So something like Octachainer can help creating an equal amount of equally spaced slices.

Ahh, thanks! That actually makes more sense. The video shows RMR creating slice points, but not actually splitting those up into separate files. I just assumed – not sure why in retrospect – that the markers would be embedded as metadata in the file.

they are not sliced into separate files.

slicing is really just a variation of modulating start position
its assumes that each slice is the same length, so when you say play slice N,
it calculates start using START = N * slice length

you can create a wav file suitable for slicing with any audio editor, as it just a wav file.

(octachainer can be used to create these regular spaced wav files)

this is a pretty common technique for samplers , its not rample specific.

where things like the Octatrack get a little more sophisticated (and so need ‘slice points’ as meta data) is they can have slices of different lengths.
they store this extra data in a separate metadata file, so that the original wav file does not get altered.
(i.e. non-destructive editing)

Thanks. I owned an Octatrack at one point, which has probably warped my understanding (and appreciation) of this topic.

I would love Rample to have a “custom” option and instead of dividing the file equally, it references markers in the WAVs.