Midi mergers and splitters with pryamid

i use a midi soultions quadra thru and havent looked back.
im thinkin of other makes which are power for second midi port b. i dont use din
so did have a phillip reese 10xout but it died years ago.
do any other squarp user use powered midi splitters

I use a Kawai Mav8 midi patchbay in the studio and a DIY Mebleep thru5 for my live setup and both work great for me.

1 works as a junction box merging and filtering ins and outs to correct places, the other 4 are 2 chains (midi output A & B of pyramid)

emagic not heard that name in long time. logic pro 5.5 use be my bread an butter until i could afford proper hardware. forgot they made midi boxs and soundcards

I used Unitor8 for years but couldn’t figure out how to set it up using Pyramid so I bought the Erica Synths Midi thru box and reconfigured the midi routing system to suit.
How do you use it as a ‘junction box’ with Pyramid? I’m unfamiliar with that term/implementation. It sounds a lot more reliable.

the unitor patch mode allows you to select which INs go to which OUTs, and you can filter (e.g. filter clock) some specific things.
So one unitor basically is the junction box indeed.
Configuration can be a bit hard to wrap your head arround… Recommended is using the old Unitor 8 control from emagic as that one “emulates” patch mode during configuration (making configuration real-time)

Here’s some helpers from spreadsheet, maybe not be 100% correct, the AMT1 and AMT2 are the 2 chains of unitor/amt units. A800 is midi keyboard, you can see it only goes to the pyramid. Motu was added later, not sure how its configured but I used it mainly for synth editors on my PC. 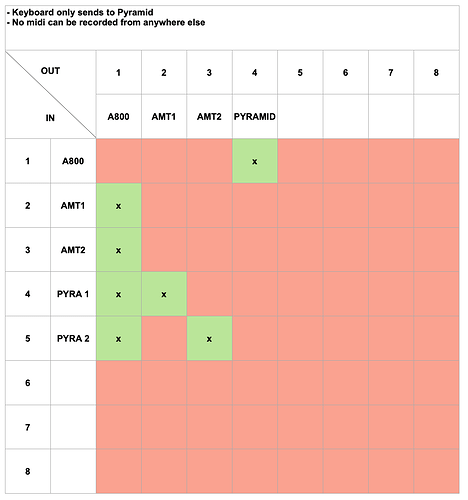 Thanks. I’ll have a look around for the Emagic control. I presume it’s downloadable and if so I may already have it if it comes with the drivers. I’ll check. I have 7 midi devices to navigate and your diagram is most helpful. If I get this going I guess my midi thru box is redundant?

Yeah midi thru boxes, mergers and filters are completely redundant in most cases with unitor/amt

now that I have enough of these low cost devices, time has come to spread the knowledge