How to control effects in sequences?

Just started to play around with the effects section of the Pyramid. Seems to be a great way to get some variety to the tracks, but I must be missing something basic. I have a track which I want to play with and without the randomize octave effect. I don’t want effect automation on the track, as it is quite short and I want to play it several times with an without the effect. I was looking for a way to control the effects in sequences, and found Assign automation, which seems to be what I want:

“You can record automation on a track filled with notes, or on a blank track. This allows one to create tracks filled only with automation, and thus mute/unmute, and sequence CC messages and effect parameter automation.”

So I assign an encoder to Randomizer enable on track 5A. I interpreted the above as that I can record automation on another track, and then mute and unmute this track in sequences. The automation gets recorded on track 5A regardless of the current track though. There is a cryptic passage in the manual:

But if it works like this, then the assign automation is no different from the track effect automation, i.e. it will be recorded on the same track as the notes being played, and the effect control is not available to the mute states in sequences. It also does not fit together with the first paragraph I quoted. As this is a basic use case I must be missing something, so I’d be grateful if someone could tell me how to achieve this.

(I have tried to make sure the effect is enabled on the track where I try to record the automation, but I’m guessing it’s here I go wrong. )

There’s this in the CC assignment section of the manual (https://squarp.net/modeassign#ancre02). I don’t recall using assign automation with effects at all myself so I don’t know if it actually applies to effects, but it’d seem strange if it didn’t:

What little effect/cc automation I’ve done it’s always been stepmode, where you certainly can have both kinds of automation on a separate track.

Then I’m missing how to do effects automation on a separate track in stepmode. That’s where I want to do it anyhow. Got the CC assign automation to work now, it worked as expected the first time.

Effects is a separate “submode” of the step mode, just like CC (and Euclid) - hold STEP and rotate the main encoder to get to it. It seems strangely elusive somehow, even though I technically know where it is I need to specifically look for it every time

Yes, this is what I referred to as “effect automation on the track”. Should have simply said effects stepmode. But that will control the current track only? You need notes on that track in order for the effect to have anything to alter. I can’t see a way to change the target track in stepmode (and it would probably be confusing).

With CC, the target is a midi channel and a control message. Different tracks can send midi messages on the same channel, so separating the notes and the CC can be done with assign automation and stepmode.

With effects the target is the pyramids internal settings, which are stored on the track.

I can understand assign effects automation from a performance perspective, but recording it seems to give the same result as normal track stepmode effect mode.

Hmm. Come to think of it, it’s quite possible that the only effect automation I’ve used is BPM, which of course is the odd man out because it’s global so the track doesn’t matter.

The effects are supposed to sit between the track output and the midi output in the pipeline: 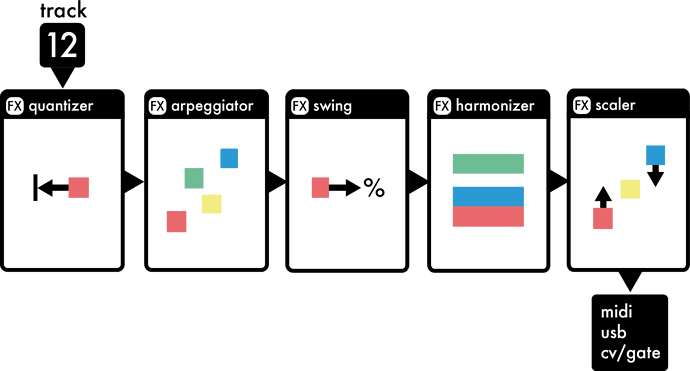 Depending how it’s implemented, it’s conceivable that the effects could affect output from another track destined to the same midi channel. Had to go and try it - nope, wont work.

So while the existence of BPM effect means that there can be some effect automation on an independent track, the manual here seems misleading at best. Or then I’m missing something too…

Unless the recording of the assigned encoders are given special treatment, I don’t think it works like I thought initially.

Assigning a CC to a encoder just enables us to send CC messages on a specified channel from the pyramid. This is no different from turning a knob on the target synth that changes the same CC. We can record those changes on a separate track, just like we can live record CC changes on a track separate from the notes.

The BPM is, like you say, global and has its own setting. We can record that on any channel as the target is unambiguous.

The track effects are stored on the track. To record those on another track would mean that the target for the parameter is kept, and I don’t think it is. The encoder is just a global shortcut to a specific track’s effect settings. It will be recorded on the target track, regardless of current track.

I just find it strange that this is not a common use case. I didn’t find anything related in this forum, and people go pretty deep here. But maybe people do live manipulation rather than sequence things in detail.

I was hoping for this workflow:

-lay down chord changes on one short looped track. Set up effects like arp harm etc.
-sequence the track to play multiple times throughout the song
-make one long fx track over the whole song that controls the short looped track fx for variations.

Seems this workflow isn’t possible and I would need to copy/paste the track around to apply different fx (or use patterns to accomplish this, also with copy/paste)

Anyone know of a workflow that avoids copy/paste? As a software engineer by trade, I like there to be “one source of truth” for things like this.

Welcome to the community.

If the number of bars/beats of your automation is a multiple of the “one short looped track”, then you can easily just make one longer track by copy/pasting the same Note data to reach the length of the Track for automation, but this is neither elegant nor significantly easier.

I must sound like a broken record to those who frequent this community, but: loopback.

The Pyramid MIDI Fx can be controlled by MIDI CC. So, create your one short track, then a separate automation track with your Fx modulations translated into CC’s. Create a loopback either by routing the data from the USB back to the USB, or via physical connection (I use Port B to the DIN IN, while also using the USB Port via a Hub which also loops back via an Event Processor). Then Assign the incoming MIDI CC’s to modulate the desired MIDI Fx.

I believe this is exactly the workflow you’re looking for with the added step of making the loopback. Also the advantage of this is you can have ONE song-length automation track to modulate the midi fx parameters of multiple tracks at once.

-lay down chord changes on one short looped track. Set up effects like arp harm etc.
-sequence the track to play multiple times throughout the song
-make one long fx track over the whole song that controls the short looped track fx for variations.