How do you live record automation lanes?

I might have missed something but I could not figure how to swiftly record an automation using an external controller.

The best method I found so far is to use the effects matrix:

I am thinking it would make sense to have an input selection in the automation lane, or maybe a dedicated MIDI channel/CC input hard-mapped to the currently selected automation lane.

So no-one using an external controller to record automation lanes?

Hey, I didn’t see this post when it first came up, but I use external controllers to do automation from time to time, although not massively often, so I’ve not thought about it that much.

I’m a bit confused as to your initial post, though. Are you recording a knob with one CC value (say 51) and then using the Hapax to remap that automation to another CC value (say 62)?

I’ve only ever recorded automation where the knob I’m wiggling (technical term) is already on the CC value of the parameter I’m trying to change, and that works fine with a normal record.

If this is what you’re trying to do, I am not sure of another way to do it apart from the steps you’ve said above. I’m not sure how a dedicated CC value hard-mapped would work, as there are only 128 CC values (and in reality, only 120 ‘usable’ ones) so not really any ‘spare’ for use in this case.

I do think your workaround is a good one, though, and has basically the same functionality as your suggestion, doesn’t it?

Hey Loz, the main point is that the Hapax has detent pots which is great in many cases but not always the best (e.g. filter cutoff sweep automation) so I’d rather use an external encoder/pot to record automations.

I was assuming that many of us would be in this situation but it’s apparently not the case.

What I meant with the CC hard mapped feature is that you could choose one of the 128 CC numbers (+ MIDI input port + CH number) in the settings and use it to record on the currently selected Automation lane.

The workaround is working fine you are right, it just feels a little complicated.

Oh, I don’t use Hapax’ pots for modulating anything, I’m 100% with you that the detent makes it awkward (I’m not a massive fan of endless encoders for anything like sweeps either, as the acceleration is always off)

I just meant that you might be using a controller that you are able to change the CC values of.

I basically spend a fair bit of time configuring presets on my controllers for the things I would use a lot (envelopes, filters, lfos, etc) so that the CC values and MIDI channels are set for the boxes I’d want to control. It’s a bit of a pain in the arse, but at least you only to do it once.

Obviously this depends on your controller, but most of the early to mid 2000s ones allow you to save multiple sets of pages of different CC values, which for some reason a lot of newer controllers don’t, or give you 2 or 3 pages max.

Yes I was researching for a one knob controller with configurable CC/Channel, I don’t have much desk space for a BCR2000 or similar. I am also eagerly waiting for the next Electra One batch which could resolve this issue, except I was not planning on putting in before but after the Hapax down the MIDI chain…

Depending on your budget, I’d recommend one of the Faderfox ones (I’m thinking of getting one when my budget increases) the PC4 gives you 16 pages of 24 knobs - Faderfox PC4

Currently I use the knobs on my NI Kontrol S61, but mostly this really old Evolution X-Session Controller that I picked up on ebay a few years ago for about 25 quid. 10 pages of 16 knobs, a slider, and 10 buttons:

I am also eagerly waiting for the next Electra One batch which could resolve this issue, except I was not planning on putting in before but after the Hapax down the MIDI chain…

Electra One is fantastic controller… I was going to say for Hapax, but actually, just generally

as its got a fair amount of midi io… If you are careful with midi assignments, you can put it both before and after Hapax.
i.e. to allow direct control for some synths, and also to be used as a master controller for hapax.

also as it supports bi directional midi, over usb you can use it in between.

if you’re not used to more complex midi routing, it pays to draw it all out on a piece of paper first, and walkthrough exactly what is sending message and to where.
really, there’s so many options, its just a matter of thinking exactly what you are trying to achieve - and ensuring you don’t end up with a midi feedback loop.

midi routing is very simple, but its easy to get caught out.

all that said, I tend to put the E1 in front of my sequencers, using the sequencer as a kind of router, as well as ‘recorder’.

one small limitation of the Hapax is it can only handle one usb midi ‘port’, so this limits you to 16 channels over usb. however, you can make multiple midi connections from e1 to hapax to over come this.

I did send @squarpadmin a feature request very early on, about supporting multiple usb virtual ports… if we get that, this will make the E1/Hapax combo an absolute killer

Yes I had the E1 for a few days to try it out and it is so deep. Like you said MIDI routing is quite simple but between clocking, message latency, making everyone talk to everyone my brain can easily start to heat up

I made a few plans already and here is the last one. 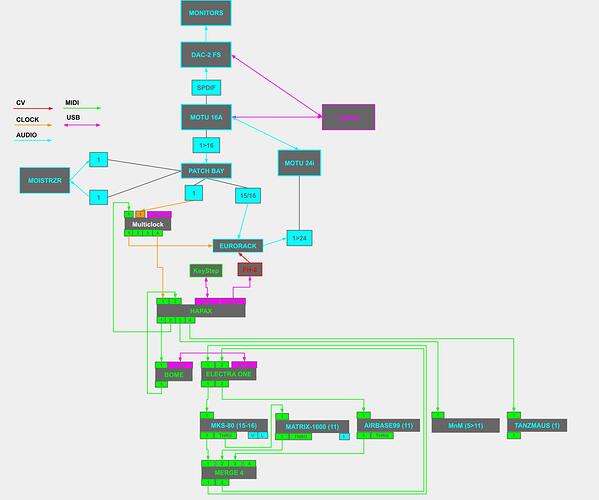 What software are you using for your diagram?

That was also my first thought

Google Draw , but if you interested in this check also Miro which I think is better in terms of User experience.

Ah, well done, thank you. Miro looks kinda cool. I used to use Visio years ago but that was before M$ went the app rental route.

Anyways, I’ll be quiet now, since Im a bit O.T.