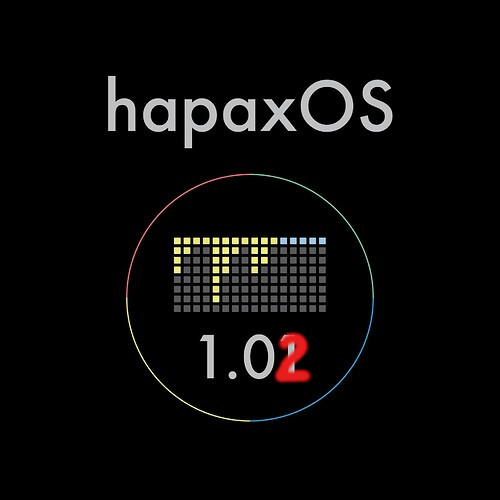 It should fix a regression that slipped through just before we released 1.01.

Thank you for the fixes !

Are the updates cumulatives or should I upgrade to 1.01 first ?

Nope, the firmware upgrade wipes the current version before uploading the new one.

Would be a good idea to put the version in the filename (as I now have two on my computer and I expect more to follow), or if thats not possible, put the bin file in a zip with the version in the name instead. That way we’re not going to get confused when they pile up in the download folder.

just delete them , once you have installed them?
(or you can renamed them after copied)

the issue is…
the bootloader, needs to look for one firmware file (hapax.bin)
I think its a bit impractical to have the bootloader look for variations, (hapax-1.02), since this introduces the chance that the user will then leave an old version on the sdcard (hapax-1.01) and now bootloader has to choose which one to use…which starts encoding the version number scheme.
besides, generally, its a good idea to keep bootloaders as lean as possible… you really do not want to introduce bugs in a bootloader as this will effectively (from a user viewpoint) potentially ‘brick’ the device, or prevent any future updates.

this means, if the firmware file has the version number in it,
users would have to rename it to hapax.bin and will forget to do this, then come here to say its not working

(regardless of how many times you tell them this, or put it in the instructions)

edit: @Thibault_Squarp , do you want to move this to Hapax OS, and repin it there.
(I don’t have permission to move/edit things in hapax os… you might want to add moderators to permissions on that category )

Thats why I suggested putting the hapax.bin in a version zip file. Who cleans up their download folder as soon as they’ve used a file? Or else who has file.zip, file(1).zip, file(2).zip lying around for ages?

Who cleans up their download folder as soon as they’ve used a file?

I hate having crap lying around on my computer… it leads to complications… like this.
its not like we are getting daily updates.