In case you’ve used a Deluge and want to get an idea of how the size of both Hapax and Deluge compare, here are a few photos of them side-by-side.

Other than comparing sizes, however, there aren’t a lot of reasons to compare them, since they do different things. Deluge is a portable synth, sampler and sequencer, aka a “groovebox,” whereas Hapax is a standalone sequencer meant to be the centerpiece of your setup.

Hapax is a bit bigger than Deluge, but it also has slightly larger pads, and more buttons, and slightly more screen area 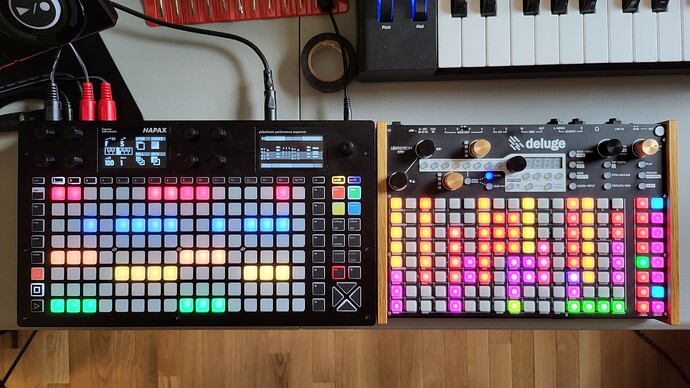 Hapax is also a bit taller than Deluge, but that doesn’t matter to me, since I usually have mine on a stand. 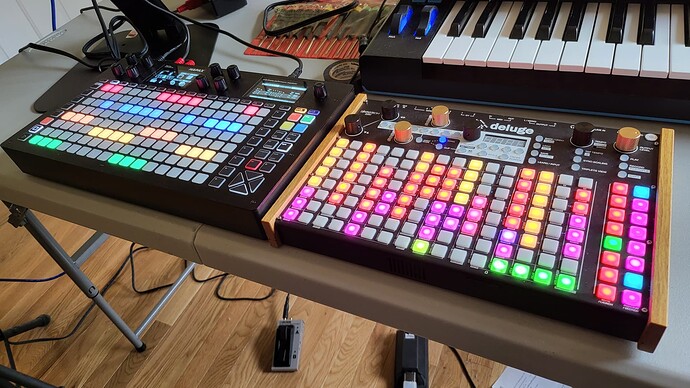 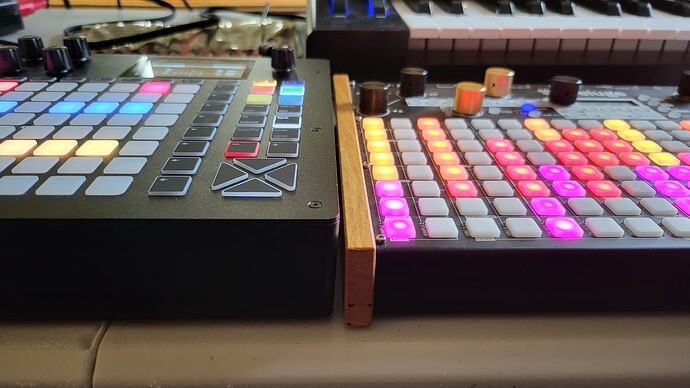 Here’s Hapax on a cheap folding stand, with a Boss RC-505mkII for reference: 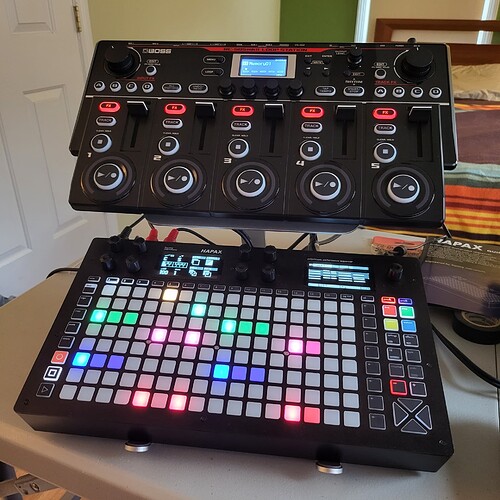 Funny , first thing I did was compare it to the size of the pyramid and octatrack… I think it’s extra height made it seem a bit larger than reality.

It’s interesting that the deluge is that little bit smaller.
But then again, oleds, more encoders, more buttons (?)

As you say not really comparable , but interesting to see form factors.

I suspect the deluge 2 might grow a bit,
whilst I get this philosophy of no display … and I do think it’s really pushed them into using the pads very well ( very monome!)
I’m pretty sure the D2 would get an oled, just to open up some possibilities. Even stupid stuff like being able to see file names properly;)

Yeah, I briefly had a Deluge, but the lack of even just a tiny screen was even worse that I had imagined. Not being able to give meaningful names to anything was just infuriating for me. So we soon parted. I can imagine they are missing out on a good deal of customers on that account.

I think there are indeed reasons to compare both.
At least in my case I bought a deluge mainly because of its sequencing capabilities, and not so much because of the internal sound engine.
When I saw the hapax I thought it was much more closer to what I’d like the deluge to be, so I jumped in.

Fair - the reason I didn’t buy a Deluge was because it just didn’t have what I wanted in terms of a sequencer, even though the form factor is fantastic.

I mean, the built-in sampling and synth stuff is super cool, but all the sampler and synth features won’t do me any good if I’m constantly frustrated with the experience of scrolling through a huge list of patterns in tracks (vs having patterns placed in a per-track grid) or the lack of a screen

. Ultimately, they do two different things.

That said, if Squarp ever made an all-in-one groovebox with drums, synths, sampler, and Hapax’s sequencer, I would

Hey - posting here because it’s a confirmed sighting of someone who owns or has used both. I’m waiting for my Hapax to arrive, and currently use the deluge to sequence (we’ll say about 10) hardware devices and sometimes my ipad. I use a master keyboard and a linnstrument. Right now both run into a cool little device, the “Sipariq” which let’s me quickly switch the channel of my controllers to any of my destinations with the turn of a knob. I also have an electra.one in the mix so that I don’t have to run around to all my devices to tweak parameters.

One of the reasons I’m excited about the hapax is it seems like, especially once instrument definitions are pushed, I’ll be able to consolidate some of these by having a template with my synths on the 16 channels, and probably not need the sipariq or the electra.one.

I know the OP said there’s not much of a reason to compare them, but I’ve always felt like the deluge gets pretty beat up on as a sequencer. To me, it’s killer feature is it’s linear arrangement mode. As far as I know, it is the only device out there that let’s you lay out an arrangement truly like a song without having to repeat shorter clips to match the longest clip.

The two thoughts I have, and I’m wondering how anyone who’s actually used both and doesn’t hate the deluge’s sequencing has adapted. The options I’m seeing are, like other clip based devices: If I have two four bar drum patterns and one 8 bar melody, copy drums a and b into an 8 bar clip for the row I need that (the 8 clip limit seems rough, but since they can be 32 bars, that’s a bit over 8 minutes of unique music in one project at 120bpm, so more of a question of whether the workflow is worthwhile than if it’s adequate). Or, keep using the Deluge in concert with the Hapax as a hardware bitwig/ableton clip vs. arrangement monstrosity. But, for that amount of complexity I might as well just dump everything into my daw after I’m done composing on the Hapax to maintain my routing.

Obviously I’m going with the Hapax because I feel like I’ve had to do too much heavy lifting and combine too many devices to fit the Deluge in as my brain, but I’m worried about missing that arrangement mode. Thanks, looking forward to contributing more once I get hands on!