As both a longtime Pyramid and eurorack user, I wanted to put some light on what I am finding to be the best module for using my Pyramid with eurorack, the Polyend Poly 2. I’m certainly not trying to sway anyone from buying a Hermod, but as an already existing Pyramid user the Hermod has always struck me as overlapping too much with what I’d already have done with the Pyramid. Consequently, I’ve thus far used other midi to CV modules (MI Yarns and Hex Inverter Mutant Brain), but the Poly 2 renders all other options pointless with the Pyramid.

The main reason is that the Poly 2 will both power the Pyramid from your rack and allow up to 8 CV/gate pairs from it, allowing you to power the sequencer and use the USB midi tracks to sequence your modular, leaving the physical midi ports on the Pyramid free for other gear. Any of the outputs you’re not using for CV/gate can be used for midi CC<CV, leaving quite a bit of modulation options from your Pyramid.

I’ve been playing with this for the last week, and it’s really everything I’d hoped for when Squarp first announced that they were making a eurorack module. As a Pyramid user, I’m finding this really allows me to unleash the full power of the Pyramid in euro.

Arguably the only thing I’d want for are more outputs (which I believe the original Polyend Poly V1 has)…I’ve not yet actually found that to be an issue for me but I’d always prefer more, of course. The Expert Sleepers FH-2 could accommodate that with expanders to my knowledge, but would require both setup (the Poly 2 is literally plug and play from the Pyramid, and easy to adjust from the module), and I’m not sure that it would power the Pyramid like the Poly 2 does.

Anyhow, just wanted to throw this out there since I’m not sure anyone else has tried this combo, and it works so well that it shouldn’t be overlooked.

I agree. I use a Pyramid with the Poly 2 and it works quite well. No dis to the Hermod, but like Accent says, Hermod duplicates a lot of the functionality of the Pyramid. Poly 2 can do 5 channels of Gate, CV, Velocity, Mod and Aftertouch. Great combo.

Have you had luck connecting the Poly 2 with the Pyramid via usb (for midi and power)?
My Poly freezes constantly if I try this setup (but works ok with regular MIDI cables).
I downloaded the latest firmware which should address some reliability issues of the usb host connection but to no avail.
(I’m powering the Poly with a Make Noise skiff).
Thanks

No, I power the Pyramid from a wall wart and connect via MIDI cables. I don’t like to add extra load to my Eurorack power supply.

I see. I’ll probably end-up doing the same. Thanks for your input.

I think the Pyramid pulls quite a lot of power when it initially powers up, which can cause issues…

ive got the pyramid connected to an iConnectivity mioXM, and occasionally when starting up the pyramid, the mioXM will power it off again.
also I see endorphins with the shuttle control, seems to have some issues

• Squarp Pyramid – works if Shuttle control and Pyramid are boot at the same time (via USB). Pyramid needs to be fully booted before the Shuttle Control finishes initializing, then it works fine. If the Pyramid gets unplugged or turned off, it no longer functions (working Pyramid cannot be hot-swapped in or turned on after the Shuttle Control has finished booting)

I haven’t had problems with powering it up (it never turned off again). Mine is more of an issue with how it communicates with the Poly 2. At some point I get some sort of freeze on the Poly 2 side while the Pyramid seems to continue working fine.
My Euro psu should handle 1A on the +5v rail (Pyramid apparently needs 500mA) which also points me to some usb-host related issue,I think?

My Euro psu should handle 1A on the +5v rail (Pyramid apparently needs 500mA) which also points me to some usb-host related issue,I think?

in my experience, usb hosts issues are often power related

what could be interesting is to try with one of the USB Y cables, which allow you to take the power externally for a usb device.

are you sure the poly2 pulls from the 5v rail? I think its more likely it will be pulling from the 12v rail, and then use its own 5v regulator to pull it down. (this is more common)

not really an issue for me, as Id use the mioXM between pyramid and poly2.
Im just trying to decide now between the new KeyStep pro, poly2 or endorphin shuttle control… I think the poly2 currently has the edge.

I was now looking for the Poly 2 power specs in the manual and found out that it actually has a switch on the back of the unit to switch to 5v for “power hungry units”. Will report back if that solves my issues as soon as I’m back in the studio.
EDIT: it works!

I tried the Poly 2 and sent it back. I had clocking issues - wouldn’t clock at 24PPQN. I have an FH-2 + expander and it’s great. Powers the Pyramid and has a crazy amount of features.

Would anyone using this combination be down to explain their system settings on both ends, I’ve had the poly 2 for a few days and cant get it to send out any signals despite seeing that its receiving gates from the pyramid.

As you may already know Poly 2 operates in five different play modes; First, Next, Channel, Notes and Mono. Which mode are you trying to configure ?

I typically use Channel mode. The manual mentions: “The Channel mode translates the data received from MIDI Channels 1-16 and directs them into the corresponding voices. This mode is what the majority of users utilise to connect DAWs or external sequencers.”

For my rig, Pyramid MIDI and Poly 2 (and most other gear) are routed via mio10 and requires mapping with their routing software. I’m using Ch 9 between both devices. Poly 2 receives MIDI via DIN cable and it’s channel is matched up with Pyramid Track. On Poly 2 side both Pitch & Gate jacks connect to eurorack module. On the Pyramid side Track length is assigned and steps are sequenced with notes.

If you switch Poly 2 to Gate View mode then you can observe when gates are triggered, which can provide some value and troubleshooting time. Also if you have Mordax Data or similar module, it will provide voltage ranges, etc.

I also send clock out of CV-12 on Poly 2 to a clock divider which feeds other modules.

This reply is more of a abstract response and doesn’t provide a detailed configuration setup because I’m not even sure which Poly 2 mode you plan on using.

Thanks for the response! Using channel mode because that seems to fit my workflow best. Looking to have a few sequenced voices and then using the rest of the cv outs for synced cc to cv lfos and envelopes from the pyramid.

I’m admittedly trying to use midi host over usb ultimately, like this thread discusses, but I’ve had issues with both host and din. When I send a sequence over usb channel 1 in host I can see that gates are being received on the gate view but it doesnt seem to translate to any of my modules (really wish I had data or a similar oscilloscope module but I dont) and neither does pitch cv. I found that when using din from the pyramid I couldnt even get gates to appear on the gate view. I doubt my module is faulty but I do think I’m missing something obvious here.

Hey buwumdi, yea, I see what you mean. Tried reconfiguring Pyramid Track to USB and physically plugged its USB into Poly 2’s Host port but I get nothing, not even the Gate view reflects input. Can’t say if the issue is on the Pyramid side or Poly 2 but will require additional testing to determine root-cause. Am slammed on a couple of work projects but I should get a change to plug away more over the weekend. Have you opened a ticket with Squarp or Polyend?

Not yet, but assuming I cant sort it myself or with the help of you or others online that’ll be the next step. Thanks for taking a go at it yourself! Let me know what you come up with, if anything.

Here’s a quick update. Even though I wasn’t able to get Pyramid USB to work with Poly 2 Host port, I had no issue with The NDLR functioning with that configuration.

Now on the Pyramid side, I completely forgot that USB was previously disabled, so I enabled it (Settings / Misc menu) and upon hitting Play it threw a Fatal Error. PyraOS is running a rev or 2 behind; v3.23. 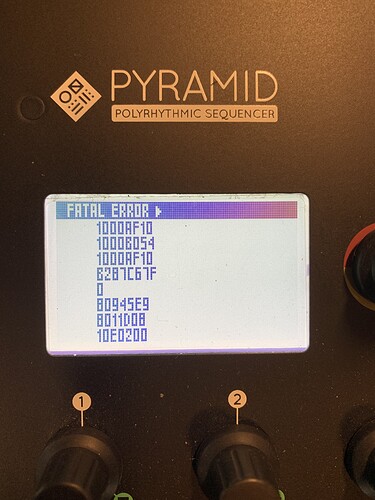 No response yet from Squarp

Edit / Update: Upgraded Pyramid FW to v4.01 (which stepped on some params) but after reconfiguring settings that Fatal Error message stopped appearing and connectivity to Poly 2 is now working.

@ buwumdi did you get yours working? Let me know if you require any more details.

Sorry this took me ages to respond to, I was away from home for some of the long delay! I figured out that my biggest issue was that I was using the jumper on the back to power the pyramid through the module’s usb host incorrectly, once I talked to Jacek everything worked! Thanks so much for your help.