I couldn’t find anything in the manual about Midi Time Code / Midi Machine Control- just clock and stop/start/continue. Is this implemented or are there any plans to do so? It would be a great thing for those of us using R2R or cassette.

Granted MTC/ MMC expects a linear sequence to sync with - otherwise the notion of absolute position isn’t very meaningful - but that’s easily enough done (conceptually at least- I won’t presume to know how hard it would be to code) by designating a track on the Pyramid as a “position track”.

I believe that Pyramid can handle MIDI Clock only.
It’s a little pity that Pyramid still doesn’t have SPP either.

Agreed on SPP; I was going to mention it but I feel it’s a dead technology now. I could be wrong though - do any of the major DAWs support it? They do support SMPTE / MTC, as does the Akai MPC series.

I still have my old fsk <-> clock box, but it would be more useful with SPP.

It’s true, pyramid doesn’t support MTC. I really wish it did.
Logic doesn’t receive clock very well, and a fantastic way to control the computer as a slave device with Pyramid as the main clock and sequencer is by using MTC.
It would be such a coup if we could send midi time code and control the DAW as a slave.

I’ve looked into this, and there’s really nothing I’ve found which can add it into the mix. If anyone knows of a way to generate midi time code/midi machine control from a midi clock based sequencer I would really, really like to know all about it.

This would change a lot in a really cool way.

Generally speaking, you get better results slaving the midi sequencer to the audio, than the other way around.

In the case of tape this is absolutely true, unless (I’m told) you have a very high-end deck. For computers it still seems to be true, although I’ve successfully slaved Reaper to MTC. Can’t speak for Logic.

It is possible to convert clock to MTC or vice-versa but clock (without SPP) has no indication of position. You have to start at the beginning every time, which is very tedious. 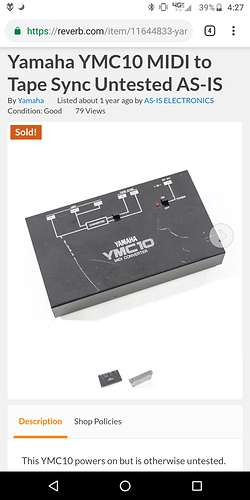 Does the squarp recognize tape sync signals like the old Korg electribes?

I’m not aware that any Electribe “recognizes tape sync signals”.

However, you could use this YMC10 box to convert MIDI clock on the Pyramid to FSK sync signals on one audio track. This would allow you to synchronize recording and playback of the tape using the Pyramid.

You should download the manual for the YMC10, which will show you how to use it.

I was just referencing this video. Phile Tipping

I was just referencing this video