Do I need a pyramid? (octatrack + NDLR user)

I currently have 5 synthesizers which I currently sequence with my octatrack.
I really like using the arp of the octa with my vermona perfourmer.

However, for the prophet 6, novation peak, the polyphonic capabilities of the octatrack sequencer are lacking.

Would a pyramid solve this?

is this all possible to combine? how to set it up?

yeah, I think a few of us have Octatracks

I generally keep the Octatrack as master, simply because some things (pickup machines primarily) don’t work properly (or at all ) with the Octatrack as slave.
… I also do this since sometime, I use the OT without the Pyramid… so nice to keep it as master.

but I have used it the other way around, without issue.
this was useful when, I was more focused on the Pyramid, that the OT.

2. just plug the keystep into the Pyramid

you can map at track on the Pyramid to the Octatrack’s active channel, if you want to go via the OT.
I do this, but to be honest I didnt use it much , but its quite nice now to play slices on the OT.
(since last update)

so the issue you have is if you want to both sequence the vermona from the OT and the Pyramid.
you could use a hardware midi merge box… and just make sure you dont send midi that will conflict.

(or of course, just switch cables depending on what you want to sequence from.)

Ive done some of this routing, but honestly , its gets a complex quite quickly, so whilst its ‘neat’ on paper.
most of the time it was a pain to remember how Id set it up .

I guess it depends how much you use the OT arp, over and above what the arp/patterns can do on the pyramid… I’ll admit the OT arp is pretty nice !

in fact, Id say that is also the thing you have to becareful of most when you have Pyramid and Octatrack.
its easy to have too many options, too many ways of doing things, that you spend alot of time trying to decide ‘the perfect’ way.
I went thru many iterations, and in the end, simplified it alot…

I got a mioXM from iConnectivity, and used it to merge midi message, so the Octatrack OR Pyramid could sequence, and I very rarely send midi (other than clock/transport) between the Octatrack and Pyramid. ( * )

( * ) though, that is a really fun thing to do too… when, you want to mess about for hours, and probably not get anything done

I’m OK with ‘only’ being able to sequence the vermona with the octatrack.
perhaps keeping the octa as master is best then.

main use of pyramid will then be the added polyphony, and the longer sequences (will this be an issue if the octa is the master? shouldnt be the case right?)

as long as you have them in sync, you should be good to go

btw: one small consideration for ‘who is master’ might be the fact that the Pyramid has only one midi din input, and two midi din outputs.
… so without using things like midi thru, or midi mergers etc. its easier to have the pyramid as master… since then you can put your master keyboard into midi in, then din 1-> synths, din 2 → octatrack

but lots of ways to make it work, so you can experiment and find which works best for you.

you might want to search this forum for other octatrack posts, it’ll likely give you a good feeling for what is easy (and fun) to do, and what can be more challenging.

Also, to add to what @thetechnobear posted, using Pyramid as Master Clock will allow you to modulate BPM via MIDIFx, in case you want smooth automated tempo changes (and other exciting tempo modulations via Fx or CC)

thanks to the both of you, this makes sense.

However, next to my master keyboard, I probably also want the midi outs of my synths to go in the midi in of the pyramid (so I can do live recording midi directly from any synth), so that means I’m going to need a merger anyways, right?

Adding my tuppence in here, Techobear is right, the OT plays nicer when it’s the master clock, but unless you’re doing heavy live audio sampling & playback or using pick-ups (as mentioned above) then it’s fine not being the master.

In fact, it opens up a world of midi malarkey. You could set your Pyramid up to step sequencer scenes or the crossfader or all kinds of other stuff

…almost like we could use some sort of thread/wiki on “different ways to marry Pyramid and OT”. As a self described dataslut & configuration fetishist, this thrills me.

…almost like we could use some sort of thread/wiki on “different ways to marry Pyramid and OT”. As a self described dataslut & configuration fetishist, this thrills me.

thanks again for the elaborate answer. i’m curious to hear how you’ve got your midi cables set up with the octatrack as master. Could you please explain in a bit more detail? (ins/outs)

its easier to have the pyramid as master… since then you can put your master keyboard into midi in, then din 1-> synths, din 2 → octatrack

arturia keystep out, and all my midi outputs of my synths, into to kenton midi merge box → merging into the midi in of pyramid

woud this setup allow me to use my keystep to control the vermona perfourmer notes (so it would then go through the octatrack)?

Ooh and I almost forgot the NDLR here, what If I also want to be able to control certain synths with the NDLR, and perhaps also record the midi of the NDLR in the Pyramid?

Since the NDLR has a built in sequencer and arpeggiators I let it control certain synths directly and use Pyramid to control other devices. Or toggle between Pyramid Tracks and NDLR parts. What are trying to achieve by recording MIDI messages from NDLR to Pyramid?

On the flip side, the Pyramid can assist with automating the NDLR by sending it CCs for key changes, toggling parts on/off, etc.

It can be interesting to control the same device using both Pyramid and NDLR at the same time but if both send overlapping messages then chances you’ll end up with stuck notes,

Afaik the NDLR doesnt have a sequencer?

I know I can use cc messages to ‘control’ the key changes on the NDLR, but I thought it might even be better to just (live record) the midi coming out of the NDLR to a track on the pyramid, because then after that, I can disconnect my NDLR and I wouldnt need it anymore (more desk space).

Right?
or am I missing something here haha

Yea, limited desk space can be a pain. As for the sequencer that’s built into the NDLR it’s called “Chord Sequencer” which is accessed via Shift-Menu Encoder 1. Below is a quick blurb from the user guide (https://conductivelabs.com/wp-content/uploads/2021/06/The-NDLR-User-Manual-v1.9.pdf). As for me, I’ve never used that feature nor have attempted to feed Pyramid with NDLR messages but I get where you’re going. Sometimes while jamming live I can’t dynamically unmute a Pyramid Track to toggle NDLR note / chord change so I tend to use a MIDI foot controller instead. The nice thing about MIDI automation is you can have multiple controller devices set up to facilitate whatever workflow permits. Like a lot of folks here, the Pyramid is my main sequencer “brain” but I also leverage other sequencers (five12 vector, Rene2, novation mk3 and at some point will add the dust-collecting BSP). But when it comes to automation, I’m a newbe and barely scratch the surface in comparison to the many smart ones here.

“The Chord Sequencer enables the user to arrange chord progressions that can be played to change the global chord for The NDLR. Each step has five attributes: Duration in quarter notes (with 1/8th note resolution, max 31.5 notes), Key, Mode, Degree and Type. There are three sections: A, B & C, each has up to six steps. A song is made up of a sequence of Sections. There are eight Section Slots, each has two
attributes: Section Name (A,B & C) and Repeats (0-8). The NDLR can Load & Save 5 Chord Sequences (1-5) and has a built in blank Chord Sequence (0).” 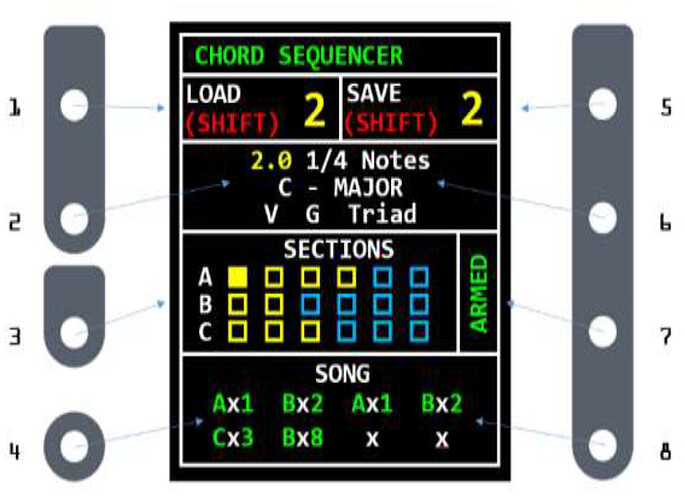