Day one with Pyramid

I spent an hour pushing buttons and getting literally nowhere.

Thanks to the Hapax bringing down the used prices of Pyramids (I picked up a literally mint V3 for £325) I finally pulled the trigger on joining the Squarp clan. While I was waiting on delivery I watched the loopop tutorial a couple of times, printed out the manual and flicked through it a bit.

Obviously, this was not enough.

I am still very much convinced that the Pyramid does everything I’m looking for and much more besides, and I know that it will be worth the effort of learning. But right now I feel like a chimp in front of the controls of a space shuttle!

Am I the only one who felt like this after the first session?

Pyramid just has a steep learning curve and there’s no easy way around it. but it does reward sticking with the process. start with the loopop tutorial and then check out specific youtube videos as you encounter more specific use cases (there’s generally at least one video out there for most common functions)

main advice for early days: start with the very basics of (1) Patterns (2) Step Mode and (3) Tracks (maybe Live Mode if you’re into entering notes in real time – the chord and note repeat functions are especially useful that way). once you’re comfortable building simple patterns across multiple tracks, then see how they interact together and that should inspire you toward more advanced programming 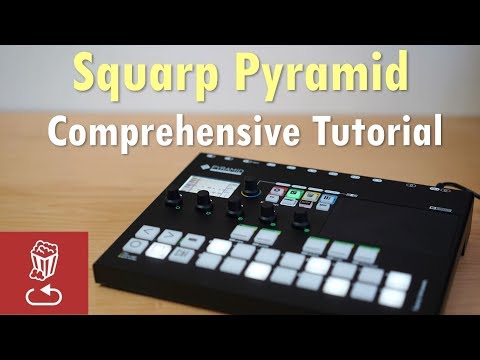 what are you finding tricky?

for some, its the midi configuration… i.e you try to hook up this thing as the centre of your ‘universe’, to everything, and it can be tough/confusing to get it right.
(midi is powerful, but frankly not very user friendly !)

my advice, is pretty obvious… (initially) ‘keep it simple’
connect one synth, and create some simple patterns…
once you get that working, perhaps move on to recording. (fixed bar, not ‘looping’

so ignore the ‘details’ until your confident in the basics,
also ignore things like fx/song mode/instrument defs initially

its just a case of picking your battles, and you’ll get there.
then you can come back, and pick up the ‘additional’ feature YOU need, as you need them.

once you have the basics down, you’ll be able to come back here with specific questions if you get stuck, and the community can help you on your way

and most of all… have fun

Honestly I couldn’t get anything going last night, from switching to the second track to getting the SD card to be recognised by the unit🙂

I hope my post wasn’t seen as a critique of the unit or asking for someone to talk me through what to do, it was just a silly post looking for a little reassurance that I’m not the only person to slam into the learning curve like a brick wall (I’ll try to keep future posts limited to specific topics).

After watching a “quick start” YouTube video this morning and spending a couple of hours at the desk with a (semi) functional brain, I’ve

*Managed to get the SD card working which involved ejecting and reinserting it while it was powered on. Now it’s recognised it once and made its first save it seems to work fine

*Got my launchpad working as a midi keyboard

So a little more productive than last night!

My initial impression of the Pyramid is that it’s totally freaking dope. Recoding long, unquantised sequences with a hardware sequencer is a dream come true, and I’m really excited at the prospect of learning more.

I think the launchpad works really well alongside it as a playing surface and a more spacious step sequencing environment.

This is the rest of my afternoon/ weekend/ year- 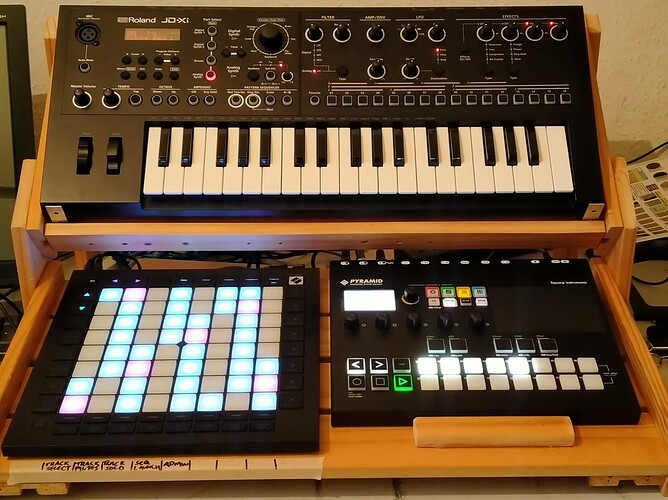 glad you got it working now

Hang in there McD. I have had my Pyramid for about a year and I was back looking in the manual last night to see how to make something happen that I don’t use on a daily basis. It is a DEEP machine and like any activity, practice builds muscle memory.

Something that really helped me when I started out was building some templates with all the settings that I found myself dialing in for every new piece, like default track length, polymeter vs polyrhythm, track call labels, sync parameters, etc. In my case this made it much easier to jump in and get started making music as opposed to rifling through all the common utility setting while my musical idea faded into the mist. Have fun!

Thanks for the kind words

I’m definitely finding a workflow and knocking out some music, so that’s awesome. I know there’s sooooo much to discover in here and I’m looking forward to trying to learn as much as I can.

I don’t buy gear very often and I’ve decided to sell off quite a few keyboards and commit to the Squarp, launchpad mk3 and a pair of Roland MC101s for writing my next project and performing it live, so I’m committing to the Pyramid for at least a year or so, a decent amount of time to learn a few tricks! The launchpad is a nice playing surface and the greater number of pads means I’ve been using it for drum sequencing then recording those sequences into the Pyramid. I’m using the 101 basically as a sound module and haven’t touched it’s internal sequencer.

With vision & a goal/patience like that you’ll be fine.

I found I needed to change how I perceived sequencing to really get around what the Pyramid’s capable of, mainly ’cause I was a bit lazy & trained by linear/in-the-box sequencers. Probably should’ve set an end point like you have, to play live or whatever. Good idea that.