Can i use Pyramid as an Midi Interface?

How can i sequence my synths via Ableton? I can select in Ableton 16 Midi Outs to Pyramid, but all 16 channels are only working in an active selected track at the pyramid. But i want for example send from Ableton two different tracks to my Pyramid. And i cant create more than one empty track on my pyramid.

I hope you can understand my problem

So in Ableton there are two options for midi in any track.

First you need to know that Ableton is able to use the Pyramid as a midi controller. In your midi preferences it needs to look something like:

Input Track most definitely needs to be on… This is the option that tells ableton that this midi device can control synths.

In a track it needs to look something like: 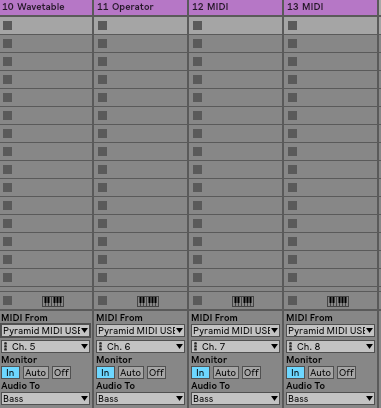 “And i cant create more than one empty track on my pyramid.” Can you clarify this? Press Track + a numbered pad to create a track. press Track + channel + rotate the 4th encoder to instantly pop it over to one of the USB tracks… You can also use the main encoder, it just takes longer. After you have created a Track on the Pyramid… Either record in to it from a keyboard, or the pads, or press Step to enter Step mode and begin editing your clip that way. Track + Length + > or < will set the length of the clip… It will appear empty unless you add something to it… Say you create three tracks in a row… It doesn’t look like those tracks even exist unless there is something in them…

[after rereading and reading and parsing the context in different ways… I think I understand what you are saying… not absolutely sure… You want Ableton to be the sequencer and Pyramid to route that to the other synths… I am not expert enough for a complex setup to do this… I believe it’s probably possible… but I also believe that mostly defeats the purpose of having a Pyramid. I have one of those cheap old midi cable interfaces that send midi out to a midi plug… This is probably what I would use in that case scenario rather than the pyramid… The Pyramid is a far better and more capable sequencer than Ableton.]

thanks for your answer, but this is not the problem

I want to do it the other way around. Sometimes I create sequences in Ableton with push and then I want to send them to my hardware synths. What I found out yesterday when I select in the Midi In Settings OmniMode -> Multitrack Bank A in the Pyramid, the 16 midi channels in Ableton are distributed over the 16 tracks in the Pyramid in Bank A. But I just can’t figure out how to set for eg at Pyramid then Track 2 to Midi A 5.

Settings OmniMode -> Multitrack Bank A in the Pyramid, the 16 midi channels in Ableton are distributed over the 16 tracks in the Pyramid in Bank A.

exactly, this maps the input channels to a track on the pyramid

But I just can’t figure out how to set for eg at Pyramid then Track 2 to Midi A 5.

aaaaaah, thanks. got it.

if i set multitrack i can set the pyramid output channels without patterns in the tracks. that was new to me. perfect!

yup, it can act as a usb midi -> midi din/cv router

whats even more fun, is that the midi fx also work.

when you hit record in live mode, it will record all tracks it receives midi on.
not only the active pyramid track.

this is very useful, but sometimes easy to forget/confuse
e.g.
i use a synth which has multi-part - so one part per midi channel.
so when I hit record on pyramid, it will record onto the pyramid track related to that part (midi channel) NOT the one i may have left the pyramid focus on.

as i say, its absolutely what i want it to do, but has caught me out!

Huh… You know… Finding this out just simplified getting all my old work on to mine… I was envisioning hand editing everything in file by file… Thanks for spelling this out.