Waffling hard here between Pyramid and Deluge. Curious to know if anyone has both or came here from a Deluge (or vice-versa).

I have both, but I have a lot of sequencers! I haven’t bothered to hook up the Deluge to any external gear yet because the Pyramid is so amazing. I’m going to sell my Kilpatrick Carbon even though it’s super cool, but I’ll hold onto my QY-70 just because…
Anyway, the Deluge is amazing in its capabilities, so if you wanted a synth Swiss army knife it really can’t be beat. The Pyramid has a screen, which makes a big difference when you are trying to dial things in on the fly. I really have to squint to see all the shift key functions on the Deluge, especially in low light because the keys light up and obscure the legend.

So what am I saying? If you have synths and drum machines the Pyramid is a better sequencer for me, with the caveat that I haven’t gone out of the box with the Deluge yet. On the other hand the Deluge is the groovebox of my dreams. It’s definitely more “fun” than the Pyramid, and you can just sit on the couch or the train or whatever and make any kind of music you can imagine.

Cool. Pulled the trigger on the Pyramid today, now just have to figure out how to use my REV2 as a master controller, which doesn’t look too promising unless I get a Mio and do routing/filtering, which kind of blows.

I have both, with the Deluge being the brain of my Setup and the Squarp being “just” the live looper/sequencer. I am a newbie on both devices, but so far this Setup takes the best out of both devices for me.

The Deluge has per song tempo and program change messages stored for each machine; so I can start sequences from each of the synths which are perfectly in sync, and I can paly live on each of the Keyboards and record loops into the Squarp if I want to, which I then deactivate and vice versae.

Dawlwess fun for hours! Next step is to practise, then make all this power bank driven (75% done) and go out to the beaches (mobility is given alreday, since I integrated the core of this rig into a DJ case). 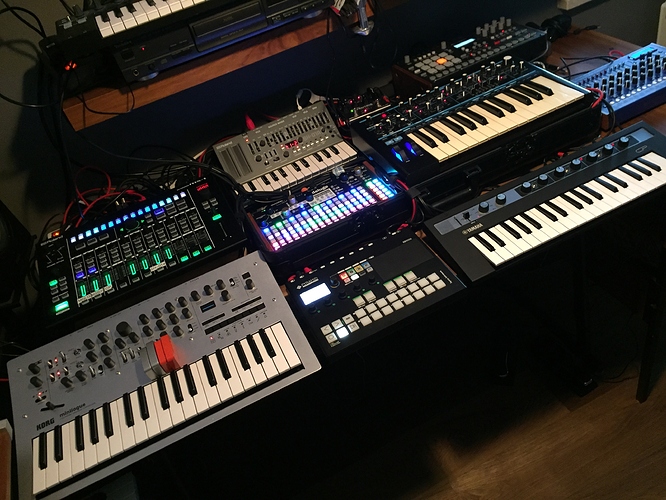 Why don’t you use the Deluge for live looping? Since 3.0 it can do that very well

I have both, I much prefer the Pyramid for composing using midi, the Deluge is great for audio arranging, and as an all in one box, it’s sequencer is very good but I just find Pyramid nicer and quicker to use for most composing tasks.