I received my Pyramid a little over a week ago and have been spending that time watching videos, reading the manual, these forums, etc. and am so excited to have this now be the “brain” of my studio - it’s so dense and powerful (and fun!).

I have all my synths running through a MIO XL and all routing etc. it now set-up beautifully between my synths, pyramid, and logic. I can hear and record everything from the Pyramid into Logic on both MIDI and Audio tracks - so all good there. Even did a test beat last night w/8 unique synths and everything was great. Now that I’m looking to record with sounds not “living in” the Pyramid I’m a little stumped.

Here’s the question, and feel silly asking so hopefully it makes some sense.

I received stems for a track that somebody wants me to lay down a synth bass line on - do any of you Logic + Pyramid users have any suggestions on how to play/record with the stems in logic? How do I sync start/stop with both? Is this just not the project to use the Pyramid with?

I can record MIDI into a Logic track and just jam there over the stems and then chop and edit MIDI notes in Logic to fine tune and line up with the other stems - but I want to use my Pyramid - and would Iove to punch in the bass-line via Sequence mode - maybe I’m just too tired right now, but can’t think of a good way to tackle this right now - apologies in advance for being a little daft.

I would imagine it works just as multitracking usually does… I’m not familiar with logic but what I would do is lay down the stems in their tracks and then create I guess two more tracks… one for listening to the midi that is sent out by the Pyramid and then one to record whatever midi notes you have sent from the pyramid into whatever synth you are using… and another track to record the audio output of the midi track that is being played by the pyramid.

Once you are happy with the midi being played by the Pyramid just record the midi out and then bounce the audio to the audio track and you should be golden. As long as you have the midi setup correctly to begin with your Pyramid and the stems should just play in time… some delay compensation might have to be fiddled with at some point but I think this is par for the course in any set up.

You’ll be fine to do that. Follow Ezmyrelda’s advice and in Logic go to;

Beneath that option there is Clock Mode and Clock Start.
I’m sure the default Clock Mode is Song- SPP at Play Start and Stop/SPP/Continue at Cycle Jump. If so, leave it as is.

Below that option is;

Clock Start: at position 1 1 1 1 ^ with a pattern length of 1 bar.
Leave that as it is too and you should be good to go.
I doubt you’ll have to alter any delay compensation but the option is there if you need to.

Logic is now your Master Clock and Pyramid will run in sync in Live, Step,Track or Seq mode.

One thing i forgot…i find it best to have no Count in when in Record in Logic when you’re writing either in Pyramid or Logic. It prevents other synths you have clocked from running out of time.

Right now I have my Pyramid powered by the USB Mini Wall Wart that came with the machine and connected into my MIO XL via DIN A - just ordered a USB Mini > USB-C cable to plug Pyramid directly into my computer and then should be able to follow the steps outlined above - tried making the Pyramid DIN destination last night but had no luck, this makes sense though - and of course with the millions of cables in my possession I don’t have the one I need!

- will report back here once I get it to close the loop on this thread. Thanks again for your time and patience here - cheers!

Thanks again for the reply juradub. I now have the proper cable (USB Mini > USB C) to connect Pyramid to computer and see the Pyramid as a destination (sweet!) and have set everything as you suggested (I think) - so Logic should be my Master Clock now, however, I’m not really noticing any difference.

Is there a setting from within the Pyramid “General Settings” I should also be adjusting in addition?

Sorry for such elementary follow-up, but also wonder what’s a test I can run to assure Pyramid’s in sync with Logic. They both (Logic & Pyramid) still appear to be working independently of each other.

Thanks a ton again, cheers! 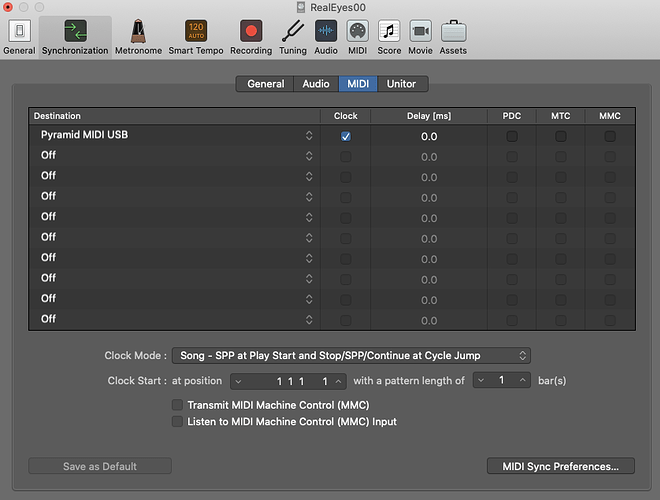 So I followed juradub’s advice as shown in my screen shot above THEN I also adjusted the following on the Pyramid itself, should have thought of that.

And now everything’s sync’d with Logic as master and is exactly what I was looking for - thanks a million again for pointing me in the right direction all, cheers!

Sorry MintPillow, i only just seen this and was about to reply when i read you sussed it yourself!
Cheers and good luck!