Syncing Pyramid with Ableton CV Tools - anyone do this?

I was thinking I’d sync my hardware synths and drum machines by sending CV clock sync from ableton to the Pyramid’s CV input. And then from the Pyramid, sending MIDI DIN out to my hardware via a Kenton thru box.

I could use an Expert sleepers ES3 to get the CV out from the CV Tools App, but I have read that for Clock only, I may just need an audio cable. Is this true?

Does anyone do this and if so, what settings or pitfalls (if any) should I know about?

You may want to build a dioded cable, as described on Expert Sleepers’ site. That will rectify any signal you send, thus keeping your timing pulses unipolar, from any audio output. If you want to send sync to the Pyramid from Live, I recommend Skinnerbox’s Trigger Tailor. It is the business. However, I fail to see the advantage of driving the Pyramid with CV from Live. If Live stumbles, it’s going to be across the board.

Hmm interesting. I think I have a similar cable coming - https://www.thonk.co.uk/shop/floating-ring-cable-14m/ Does that seem like the cable in the schematic?

The advantage would be to eliminate jitter from USB MIDI sending to the Pyramid, which is what I use now. I’d love to get a tighter sync if possible. If I can’t do it, not the end of the world but CV is so fast and tight that being able to get sync with just a small Ableton plugin.

On that note what does trigger tailor do differently? I glanced at it but am not sure what it does differently than the Ableton Clock Out plugin. ill have to grab and see. Just thinking Abletons may be more stable.

Trigger tailor, among other things, has a variable width pulse, and it responds to midi notes, so you can make it swing, you can use it in all kinds of divisions, create arbitrary timings, slide it around in the bar, etc… The variable width pulse is useful for the skip function on my Cocoquantus, where the up swing of the pulse sets a marker in the buffer, and the down swing invokes a jump back to the flag, I forget which other pieces of gear respond to this, but I know some do respond to both the up and down swing of a pulse.

Regarding the cable, it said it was suitable for DC coupled audio interfaces, which tells me it is NOT dioded. A dioded cable is one that you would use with an AC coupled interface.

However, I would be far less concerned with jitter down a USB cable than just straight up wonky timing from Ableton itself as you turn devices on and off, and launch more or less complex clips.

If you REALLY want to get stable timing between Ableton and the Pyramid, I’d actually suggest getting a Missing Link, and synchronize that way. When doing so, neither become reliant upon the other directly for clock, but instead both clock to a network, and either can start or stop independently, and they will always come back in on time, even if one stumbles. Link is kinda dope like that. 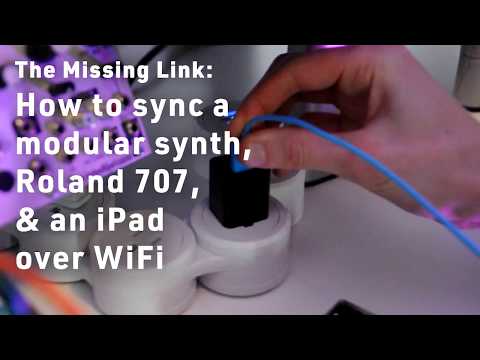 Very cool. Never heard of the link before.

Not quite sure how I’d hook it up between a PC and Pyramid though.Currently I send sync from ableton from USB to RME’s MIDI DIN out to Pyramid MIDI in.

With Missing Link, you connect wirelessly to Ableton. You use your PC or Missing link to create a Link network via wi-fi, the other machine logs on, and as soon as one person hits play, the clock starts. Doesn’t matter if either or both stop, the clock is still going. Any machine on the link network can change the tempo, it’s totally anarchic in that sense. The network supports up to six Link enabled devices, i.e. Laptop, ipad, friend also running Live on another laptop, Missing Link clocking your Pyramid, which is driving your other hardware, drummer’s phone running Soundbrenner metronome so that their click in ear is sync’d, and that would be one Link network full…which should hold you for a little bit.