Hello, I am having a problem where my SH101 will not play two of the same note when triggered from it’s own keyboard, when connected to the CV/GATE on Pyramid. This problem has been reported about a year ago, posted about twice in the forum by another user and then closed with no fix. Is this a bug and is it fixable? Thanks, I have included a screenshot of the post. My problem is, exactly, the same as this example. 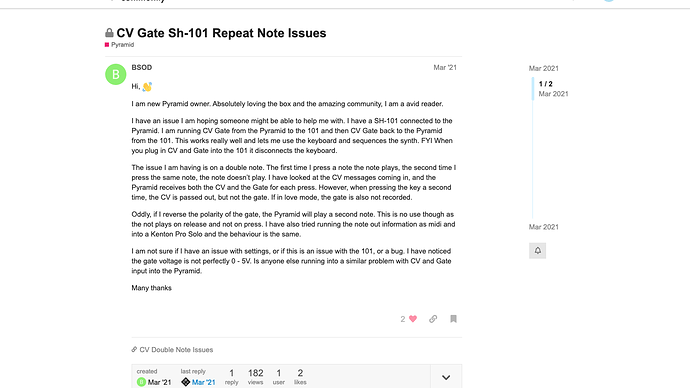 mod note:
topics ‘auto close’ after 21 days of no activity… basically to stop necro posting.
also in this case, Id say no-one (in the community) had anything to say in the matter.

topics on this forum, are NOT related to bug reporting… things being closed have no baring on bug status.

ALL bug reporting MUST be done via the contact form , as this forum is not monitored for bugs or feature requests by Squarp.
this forum is for community discussions only.

in the past Ive used cv/gate in (and out) on the pyramid, and not experienced any issue… so a bit unclear whats going on here.

unfortunately, I dont have an SH101, so cannot test it in particular.

if you look at gate IN (on the pyramid cv monitor) , do you see the gate go hi-lo, hi-lo as expected?
is it just the gate OUT thats not following? (again look at the monitor)

also you can try recording on the pyramid, is there one continuous note? which would indicate an issue with input.

I think key to understand this issue, is to first start by understanding if it’s an issue on input or on output…
trying to see exactly what the pyramid thinks its sees, and how it responds.
and similarly, understanding what the sh101 is sending and expects.

gate level shouldn’t matter too much… theres a threshold, so doesn’t need to be 5v exactly.
(can’t remember threshold exactly… you’d need to test that)

given the SH101 has been mentioned explicitly… Ive a suspicion its something to with how its working… but given its all just voltages it should be possible to figure out why its acting oddly.
(unfortunately, only someone with an sh101 can do this!)

if you have a eurorack system, then Id be tempted to look at voltages put out by both the SH101 and the pyramid, and also try sending in some manual voltages… to see if you can replicate.

your best approach is to get together does details of what your issue is, and what the pyramid is reporting its CV monitor… and then report as bug (if necessary) via the contact form

I posted this bug a while ago to Squarp. They were going to do some tests using a borrowed SH101, but they weren’t resolved – they believed it was an issue with the 101. It would be great to post this bug as well to see if we can get them to have another look at the issue.

The problem is, if you have CV/GATE connected from the Pyramid to the 101, both in and out, in a sequence, if you have the same note repeated, it doesn’t trigger the notes after the first. I have noticed if the release is up on the ADSR on the SH101 it can help the issue.

This was one of the main reasons I purchased the Pyramid, to sequence the 101.

Thanks! Unfortunately, I ended up selling my Pyramid - sequencing an SH101 was one of my primary uses and it didn’t work.

I hope they resolve it, if it is a documented bug!