Hello, are there any limits to the amount of project files (.pyra) stored on the sd?

the specs say its limited to 256 projects.

as for other limits, midi files (and the project files) are pretty small, so I dont think its likely you’ll hit something list filesystem limits on an sdcard.

I actualy dont keep many projects on the pyramid, so never really noticed it… with the 10-15 I keep on my pyramid…

I tend to ‘archive’ projects them to my computer once Ive finished with them… since sdcard DO fail, so you are better to have them on your computer and backup’d up anyway.

btw: Im not sure why you’d want lots of projects on your pyramid.
if you are thinking of using it as some kind of ‘midi playback’ device - Id recommend you read other posts about this first (search forum) as its been discused quite a bit in the past.

@thetechnobear , thanks for your reply.

I just got the Pyramid and am still figuring out my workflow. Basically I asked how many project it can save because, I like how you can clearly label them. What I have in mind is: for each song I write I’ll save a separate project file. That way I don’t have to navigate more than one song across the tracks and sequence.

I can’t imagine a scenario where I’ll need 100, let alone 256 songs all at once. So what I’m thinking I’ll do is just have my computer be my main backup for all the project files, and whichever songs I need access to will remain on the SD.

How do you save all your various songs or pieces?

Ah, I just realized a limitation to my method. I can only have one project at a time, so in a future world where I’m performing more regularly, I’ll need a set worth of songs on a single project file.

If I could clearly label Sequences, this would all be a bit easier to manage. I just have this issue where I produce tracks/sequences and save them and then some time goes by and then I have trouble remembering exactly where they were saved.

Is there a good MIDI librarian to move tracks and sequences between different project files?

You can’t really have multiple songs in one project unless you can work within some tight constraints. Don’t expect to be able to take all songs you’ve made and combine them into a single project like you could in Ableton.

So do you save each composition in a separate project file?

:: raises hand :: i’m one of them (or the loud one anyway). I’ve done abunch of research on this on my mk1 and squarp has confirmed. Yea, there appears to be a clock latency introduced when drawing the menu that’s dependent on the number of songs on the card. This only affects you (afaik) if your’e using the ‘send clock on load’ feature to run other sequencers while you load songs. I keep 10 to 15 (or maybe even 20) on a fast sd card and i’m just fine. I think with the 4.0 improvements I had to get upwards of like 40 or 50 to trigger the issue (which is more noticable on some synths than others)

This is up to you. It depends on what kind of music you make and how much interaction you do with mutes and pattern changes.

If the goal is a set of songs, use one project. Structure things around using as few resources for each song as possible. Tracks, patterns, notes, control events. Sequences only 32 of them so maybe they could be your “next song” buttons. But you might not need sequences at all it’s up to you.

You can move patterns between tracks and projects by putting the SD card on your computer, they’re just midi files.

The other way is one song per project and record midi (or audio) to Ableton and use Pyramid for supplementary stuff like LFOs live looping etc if at all. This is only if you want maximum composing freedom.

And personally I hate lugging gear so I lean towards the latter and recording most of my stuff down to audio. Bring my flight case and maybe one keyboard, laptop and launchpad or pyramid.

When you say number of songs, do you mean number of project files?

I’m trying to get a sense of how other folks use this machine, so you save one song or composition to one project file?

Thanks for your input @roger !

When you say number of songs, do you mean number of project files?

I’m trying to get a sense of how other folks use this machine, so you save one song or composition to one project file?

Hey - in this context I’m referring to the number of project folders on the root of the sd card. I used to sometimes do multiple songs on a single project folder, but I’ve gotten the clock on load to work well for me and stopped doing that. Usually i’m not performing (i’m composing) and will just have a bunch of projects on the card. When I am performing I just do a little bit of card management.

Does the sequencer stay in sync while loading a project? Or do you have to press play at the right time?

It’ll sync within a bar. I’m not sure if there’s a setting for that, i don’t think there is.

I think its fixed to one bar.

and yes, you have to press play after the project has loaded to ‘start’ the new project.
(but the clock continues to run during loading) 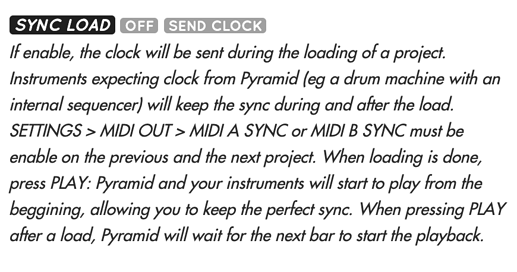 to be clear (for others reading), and to ‘set expecatations’

I think the main purpose of this function is to keep the clock running, so that external instruments (relying on pyramid clock) do not stop whilst you load a project.

imho, Id not really call it a sync’d load, since you still have to press play to start it, and there are some limitations when I played with it last. ( * )
e.g. iirc, it only really works if the projects are the same tempo, since the tempo changes as soon as a project is loaded (not when you press paly)

it does have its uses, but if you plan to use it, Id definitely check out other posts on this forum regarding its limitations.

( * ) tbh, this was a feature that was added later, and I think Squarp have done ‘what they can’… going further would have probably required major changes, which was going to happen given maturity of pyramid.

I think the main purpose of this function is to keep the clock running, so that external instruments (relying on pyramid clock) do not stop whilst you load a project.

e.g. iirc, it only really works if the projects are the same tempo, since the tempo changes as soon as a project is loaded (not when you press paly)

Actually, there’s a way to load songs of the same tempo as the existing song, you just hold 2nd when you select the song. If you don’t do that, yea, your sequencers will all jump. If you do that, then you can slowly increase/decrease the tempo to the next song after you load (or before you can do this before you load, I suppose). I’m not sure if that 'Keep tempo" came out after the clock on load was initially released or not, as I’ve only recently been able to get this stuff to work.

it does have its uses, but if you plan to use it, Id definitely check out other posts on this forum regarding its limitations.

Yea - I have to 2nd technobear on this point (heck, the posts he’s referring to are likely going to include a few of mine). Like, these features are there and you can use them. Since 4.03 or so, they’ve been somewhat stable. I’ve gotten it to work and i’m totally working with these features all the time - but it requires some engineering to your rig and play style, and there are a lot of limitations to discover in the process. If you like things like really getting to know your clock and control signaling, then this stuff is for you.

That said, I think it’s worth it, but i’m a masochist about this kinda stuff