How Accurate is the internal clock?

Yes, ableton live 10… with ableton as master.
On an iMac running latest high sierra release.
It’s my main music computer so I admit to ‘tinkering with’ quite a bit, particularly disabling non essential services.

Unfortunately, it’s pretty common for different users to have different experiences , it’s all down to setups, , software , hardware - everyone has something slightly different.

Mark, let’s exchange midi sync setups we use in Live. Will post a screenshot. Thank you!

this is my actual sync going out from ableton. 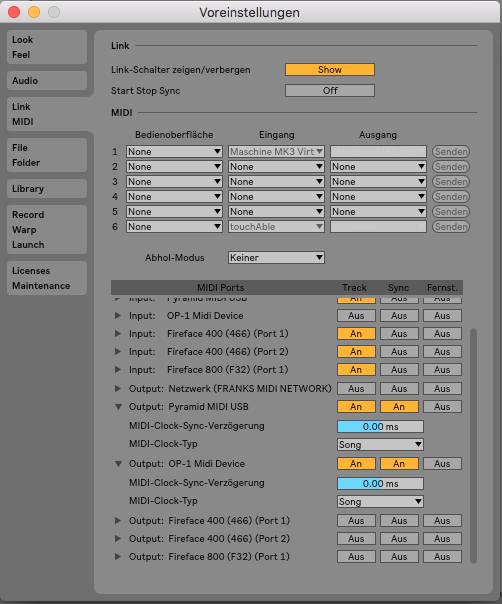 Enough! As a master clock my squarp is flawless.I tried it at 40bpm…clocked a n orb,zillion,max49,EMX…end result I got this really cool tamborine sound out of the korg that sounds like a train passing by…YA that shit makes me happy.AND i can keep that tempo use the sound and have normal stuff at useable tempi to try to make music that somebody else may enjoy listening to.

@Buzz - Great that it works for you.

Just found this one at the fb group 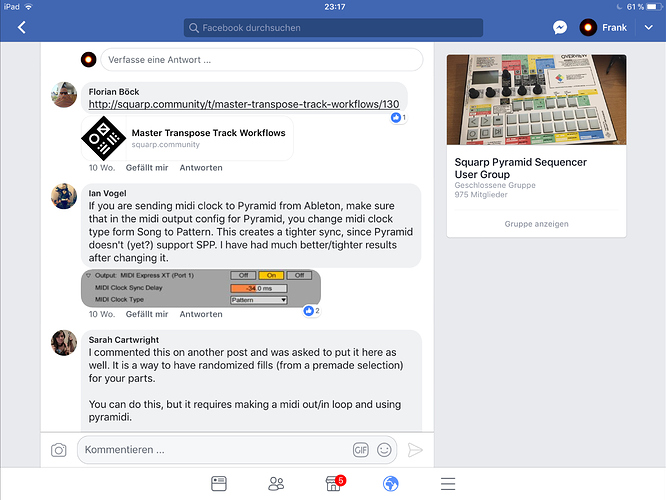 Someone sync pyramid with Logic Pro x ?
After adjusting logics “ delay “ to almost 100ms it seem to be pretty synced .

But have to start to play the sequencer from the beginning in logic and always .

Is there any way to sync them both anytime within the track / song ?

I’m slightly reluctant to post this, as it could be opening a can of worms.
My methodology is to have a wholly hardware setup with the Pyramid driving everything.
I use either a Tempest or AudioThingies Double Drummer . The former just synced from the Pyramid (i.e. timing slaved to pyramid, but sequences created in the Tempest itself) the latter sequenced entirely from the Pyramid.

I then record using my LIO8 console programme.
Once the files are recorded, i import them into Harrison Mix Bus.
From there I drag the grid to the beats by eye.
What I am finding in a very consistent way is that if I set the tempo to say 135bpm on the Pyramid, that the actual tempo according the Harrison Grid is 135.025bpm
The actual variance from the Pyramid tempo does vary slightly depending on the core tempo (e.g. 126bpm is 126.03 or something)
But the fact that there is a variance is definitely there. The beauty of it is that once I have established the bpm the Pyramid seems to be exceedingly accurate in terms of tempo. so the grid and audio stays aligned once i have worked out the correct bpm precisely.

I’ve not tested this exhaustively. I’ve not been wholly scientific in assessing this either. But it is something I’ve noticed.

Over the years I’ve just sort of come to accept that one device’s tempo is going to be different from another device’s tempo. Even between software programs using the same clock source.

It’s cool when using software that we are able to account for these differences and get some rock solid timing. It’s also interesting sometimes to have things slightly out of sync. I like this better of course for looping things than entire tracks, but I don’t think I’ve ever encountered two clock sources which were ever perfectly in time, and stayed that way for 10-20 minutes.

Accounting for, and adjusting for this is important when tracking or performing long compositions. But I don’t think that it’s a shortcoming of the pyramid per se… it’s the nature of comparing two clock sources.
Some are as tight as a drum, others are loose and sloppy. But when we compare them with one another, then we see that there are always discrepancies.

Midi sync is good. Din Sync is also good. These things mark time, and in theory maintain the tempo connections. If Pyramid is the master, it is sending that sync clock. If Ableton is the master, then it is responsible. Time, electricity, circuitry, software latency, and so many things play a role in the offsets. We’ve come such a long way… perfection remain elusive.

I spent the afternoon trying to figure out what was up between Reaper and my Pyramid.
TL;DR: Pyramid clock is locally rock-solid but globally gets slowly out of sync compared to Reaper.

I have Reaper setup to listen for SPP from the Pyramid, with both set the same BPM. I then record tracks one by one. The recorded tracks stay perfectly in sync with each other but gradually drift out of sync with Reaper’s beat markers. For example, if I record 30 bars of 4-on-the-floor kicks at 120 BPM (240 beats), Reaper’s final beat marker is at 60.000 seconds, but the last beat recorded has its onset at 59.986 seconds.

I did the math and, basically, if I set the Pyramid to 120BPM, and Reaper to 120.028 BPM, Reaper’s beat markers and Pyramid’s triggered beats stay perfectly in sync over a 60 second recording period. So that’s a solution for 120 BPM (unless you’re recording for >10 minutes, I guess). Unfortunately the BPM offset seems to be different depending on the Pyramid BPM - but at least it seems to be consistent and repeatable.

I’m going to dig a little deeper - hoping I can come up with a consistent solution that works across different BPMs.

USB MIDI in/out of a computer is prone to jitter in my understanding.

Or nix the computer, perhaps.

Hi, I’m completely new here, this is my 1st post, and I haven’t even ordered my Pyramid yet (will be doing so tomorrow, decision has been made). I just checked in to grab some info and stumbled directly upon this thread.

Reaper doesn’t sync to incoming midi clock. Two time-based devices freewheeling will inevitably drift apart. The only way I found to keep them sort-of together is the following workaround: I assign a CC to the tap tempo in Reaper, and send it that CC on every beat from the master sequencer. Now Reaper will follow the master tempo changes. It’s fairly accurate, not the panacea but better than nothing. I kept stuff together for over 15 minutes including slow-downw and speed-ups and experienced just some slight phasing coming in and out when mixing two identical audio sources, one from Reaper, and one from the master device (My Octatrack in this case). You might try this out and see if it works for you. Might be, might be not. The quality of your midi set-up (computer, interfaces) counts of course.

If you REALLY want to test the accuracy of the Pyramid in a fair way, you don’t do it with a DAW. You do it by going to a friend with a high end studio and you test it against something like an Antelope 10MX Atomic Clock. A hardware clock that is solid enough to run an entire studio’s networked audio, multiple DAWs and hardware from. Timestamp start, and timestamp 1200 beats. At 120bpm that should be exactly ten minutes. If you have a deviation, you’ll see it. Do that five or six times, and see what the average deviation is. There will be some, but if it’s a 1/16th at 120bpm in one hour…running unsynchronized from the DAW of your choice…that’s pretty fucking good.

So every hour, the Pyramid deviates by 0.03125 seconds from your DAW, and that’s a major problem for you???

No need to be passive-aggressive, Mr The Grump. The actual slippage (DAW vs Pyramid) at 125bpm is more like 10ms every minute. The microtiming that makes a groove “flow” relies on onsets staying in place relative to each other with ~1-2ms accuracy. If the actual beat positions are shifting by 10ms every minute (0.6 seconds every hour) relative to the DAW, and I’m assembling grooves from different parts of the recording, it does become a problem, yes.

As an addition to my above comment:
Having been a VST programmer in the past, I would like to draw your attention to the fact that a DAW is not synced to midi clock but to the ASIO clock. (if you use ASIO) . Which, BTW, is the main reason for the fact that a DAW can only use a single ASIO interface at the same time. It’s all about buffers and the clock of your audio interface. This has not been mentioned at all in this thread. Reaper, Ableton, Cubase all advance their counters according to what the audio interface hands over. A DAW can’t sync to midi clock. Without any linked clock between Pyramid and Reaper, I should say that the onset at 59.986 seconds is surprisingly accurate.

I have Reaper setup to listen for SPP from the Pyramid, with both set the same BPM.

SPP is not a timer. It just sets a start offset for the receiver and is not dynamic, It is sent with the receiving device in a stopped state.

I didn’t read the whole thread through, but for your purpose I would have synced Pyramid to Reaper because Reaper’s midiclock is derived from the audiointerface’s ASIO clock so your recordings will remain sample accurate. I have read that Ableton’s midi clock is not reliable, I don’t know about Reaper: but my take is that a RME interface on an optimzed PC will perform better than a entry level interface on a off-the-shelf laptop. Just my 0.002…

Thanks, yeah I figured that out eventually, hah. I’ve also been informed on another forum that the drift compensation I’m doing by fudging the BPM on Reaper is likely going to depend on the temperature of the crystal oscillators in both the Pyramid and the USB audio device, and will shift a little over a recording session - which I’m actually seeing in action.

I did try setting the Pyramid to sync to Reaper, but the beat offsets shuffled all over the place, and it ended up sounding “drunk” (in comparison to the really stable timings I’m able to get running the Pyramid on its own).

I bought the Pyramid so I could make music without a laptop. Reaper is there to capture what I’ve made, after the fact. It doesn’t make sense to compose music based on micro-timings provided by the Pyramid alone if those micro-timings get destroyed as soon as Reaper has to be the master clock.

Did you try different buffersizes and (if the driver allows for it) thread priorities for the audio interface?
Did you check if you don’t have a significant amount of DPC’s which might cause hardware interrupts to be delayed?

There’s a firmware for midi gal which you can use to assess midi clock timing.